Thanks so much for having me on your blog today, Lea 🙂

I’m here to tell you all about my newest release Man-Droid the Orgasmatron. Imagine a future where sex-androids are a common commodity and they look so real, that no one can tell them apart from the real thing, so to speak. And then imagine that one of those Man-Droids has always wanted to feel more human, so his inventor has given him an experimental emotion chip.

Such is the premise of my story Man-Droid the Orgasmatron. Do you know how much fun you can have when writing such a story? Quite apart from the obvious endless orgasms (Man-Droids are matched to fit their human counterparts perfectly for maximum enjoyment), the emotions at play were fun to write too. I may have tortured Elliot a little with that cursed appendage that he suddenly cannot control.

There is an awful lot of humour in this story, as well as scorching hot sex, and a tender love story, because at the end of the day, it’s all about the romance.

Can there be a future in a relationship between a human and a machine? You’ll have to read the story to find out. 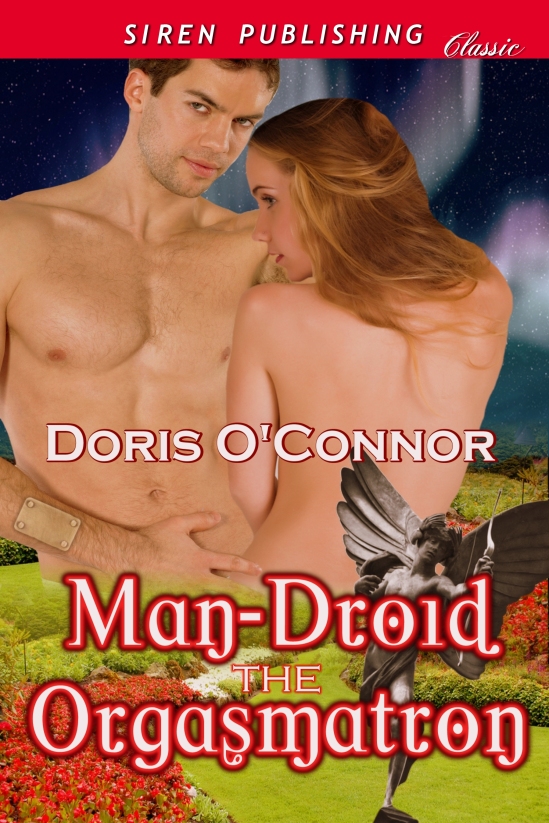 The plan had been simple. Sign up for the sex android trial, so that she had a doting boyfriend to present at the dreaded school reunion.

It was just her luck that Bethany Devlin had to get the one man-droid with an emotion chip. Unable to resist Elliot’s charms, she finds in him the only partner she can truly submit to. If only he was real and not just an illusion.

Elliot Parsons has a hard time coming to terms with the fact that he has emotions. Orgasmatrons are programmed to fulfill their partner’s every sexual fantasy, but Beth proves to be so much more than just another program to run through. He needs her submission like the very air he pretends to breathe, and he will do anything to keep her safe.

Deciding what is love and what is lust proves nigh on impossible when the government interferes. Time is running out…

Elliot seemed in a deep sleep, and she took the moment to truly study him. He truly was male perfection, every taut muscle relaxed in his sleep. If only he wasn’t a machine. Beth shook herself. Where had that thought come from? She wasn’t looking for a relationship, was she? Men took over and left their dirty clothes on the floor, not that Elliot had done so. She smiled at the sight of his neatly folded trousers on the chair by her makeup desk. His shoes stood underneath the chair, his now-dry shirt draped over the top. No, her Man-Droid would not make a nuisance of himself. He was programmed to please, and boy, did he do that. She just had to remember that this wasn’t real, and it couldn’t last. He might have an emotion chip, but that did not make him human. Reading more into this arrangement than it was would be a one-way ticket to heartbreak city.

Elliot was so utterly still, unease traced a line of gooseflesh up her spine. Was he even breathing? She leant close to hold her hand just over his mouth and nose, waiting for the breath that never came. Of course it didn’t. He was probably recharging or some such, and he didn’t feel the need to keep up the pretense of breathing.

Even with that further confirmation of his not-human state, her hormones weren’t listening. She traced his perfect jawline with her index finger, over the prominent Adam’s apple, and then followed the fine swirls of his chest hair. His skin was reassuringly warm under her fingertips, his heartbeat a steady thrum when she bent her head to listen to his chest. From this angle she had a perfect view of his fully erect cock. Thick and long, it reached almost up to his navel, and her throat went dry. She hadn’t managed to get a good look at this part of his anatomy last night, and just like the rest of him it was perfection. She smirked, recalling his statement that he had no control over his dick around her. Beth hadn’t entirely believed that claim, but with the rock-hard evidence in front of her eyes, maybe he had been telling the truth, and besides, he wasn’t supposed to be able to tell untruths. Then again he wasn’t supposed to have emotions, either, so who knew what to believe anymore.

All she did know was that her fingers itched to touch the thick head. Velvet-covered steel met her tentative exploration, and she glanced up to see his reaction. He still seemed fast asleep, so she took his shaft in hand. His heat branded her, and she swallowed hard at the weight and thickness of him. A drop of pre-cum gathered on the tip of his cock, and she closed her eyes and licked the liquid off his slit. Her taste buds exploded with the rich flavor of chocolate and coffee, mixed in with a hint of strawberry, and she released him with a frown.

She sensed rather than saw Elliot stir, and his cock grew bigger and thicker under her fingers. The delicious scent of all her favorite flavors intensified until she couldn’t resist temptation any longer, and took him deep into her mouth. His growl in response trembled through every fiber of her being and settled low in her abdomen. Her pussy clenched and she steadied herself on his thighs, when Elliot lifted her effortlessly until she straddled his chest. He blew against her wet slit, and Beth moaned around his aroused flesh in her mouth, causing his hands to tighten on her thighs.

Beth didn’t know who groaned loudest as she stepped up the suckling off his dick, as though it was the sweetest lollipop, and he in turn lapped up the juices he spread with his fingers. She lost her rhythm completely when he pushed his thumb through the tight ring of muscle and massaged the walls of her vagina with his other hand. With that unerring precision he had shown the night before, he found and massaged her sweet spot until spots danced in front of her vision.

His lips lifted, fucking her mouth with his cock in tune with the fingers up both her holes, and utterly filled and taken over by him, the triple stimulation proved too much for Beth. She screamed her release around his dick as the waves of her climax sucked her under, until she could only feel and hang on for dear life. When her body finally stopped shaking, she lay sprawled along his body, his cock inches away from her lips, and she moaned her denial.

When she tried to take him back in her mouth, his sharp, “No,” stopped her dead.

“I want inside your sweet pussy this time, Beth. Scoot.” He grumbled the words and he shifted her downward until he had her aligned just right. With a tug to her hair, he pulled her upward, and like a heat-seeking missile, his amazing cock found its target.

Beth almost came again, so intense was the feeling of being impaled on his thick member. It twitched and grew inside her until it hit every sensitive nerve ending.