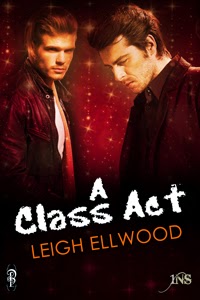 So here I am, minding my own business and preparing another post for the TRS release party on one of the box sets, when I get word my latest Decadent Publishing story is out early! Wait, what? I have to promo that also? ACK!

Seriously, I’m thrilled. I had so much fun writing A CLASS ACT and I hope if you love M/M you’ll pick it up. Enjoy this preview.

Barry Kellam receives a mysterious invitation from 1Night Stand and can’t imagine who would arrange a night of sexual passion with him…except perhaps a former student who’s gone on to greater things.

Paul Merrill is the toast of Broadway. While the awards and fame are nice, he wants to  share his success—and his body—with the man who inspired him. But Dr. Kellam isn’t  one to date fellow faculty or alumni. Will he answer Madame Eve’s call?

The fleeting idea that Paul Merrill was somewhere else in Manhattan right now set a chill in his heart. Maybe some billionaire in disguise arranged this, like a super-rich parent he met at an open house who misinterpreted a handshake as a come-on. He shook away the ridiculous notion as the elevator floor vibrated. The ideas ballooned like fantastic movie plots, not unlike the one that would make Paul a household name.

At Room 2401, his hand trembled and it took three tries to get the green light. “Room” hardly described his quarters for the night. 1Night Stand appropriated them with a lavish suite with wide panel windows revealing Times Square in its explosive, mega-watt glory. The waving red lines of the story-high Coca-Cola ad mesmerized him, but only momentarily as he fought to keep his bearings. If his date was here, he was probably in another part of the suite.

The bedroom, no doubt. He swallowed back his nerves, inhaled, and stepped deeper into the living area. Large, suede sofas faced a wall-sized entertainment system. The wet bar looked better stocked than an actual restaurant. Barry’s mouth watered for a shot of vodka.

Barry’s heart jolted and his direction whipped to the left toward the approaching figure. “Paul, thank God it’s you.”

Be sure to pick up the first story, A DIFFERENT CLASS!


ARe ~ Kindle ~ B&N ~ Decadent Publishing
FDR High Class of 2004 graduate, Glenn Carson contacts fellow alumni to get a list of who will be attending the upcoming festivities. One call to a disgruntled former student leaves him shaken—apparently, not everyone is looking forward to the reunion. Hoping to ease his frustration, he contacts the 1Night Stand service for a relaxing and passionate encounter.
Known as “Mumbles” to former classmates, Rod Maloney would prefer to focus on the present and his successful business. However, past tragedies continue to haunt him, so he requests Madame Eve find him a man to show him a hot time and help him forget his troubles.
Will their one night together lead to a reunion after all?
~
I am Leigh Ellwood. I write smutty stories about people who like getting naked and having sex. Some have more sex than others, some have sex with people of the same gender, some have sex with more than one person, and still others have sex with toys and things that require the use of batteries. My stories range from a few thousand words to well past 70k.
I have won awards for writing, and I have received 5-star reviews. I have also received 1-star reviews and people have looked at me funny at cons and events. I enjoy reading, yoga, and rock music. I liked the 9th Doctor best. I don’t wear dresses. I won’t cut my hair or color it. I will not limit myself to one genre when it comes to writing. I write contemporary, paranormal, gay, lesbian, menage, geek, short, long, purposely funny and hilariously sad. If I never win a major award or make a list, I will live content in the fact that I have written something, and that’s the dream.
Visit Leigh online: