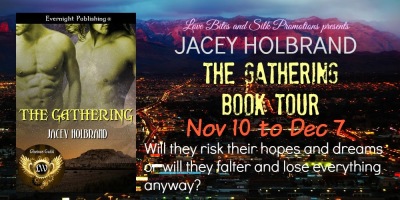 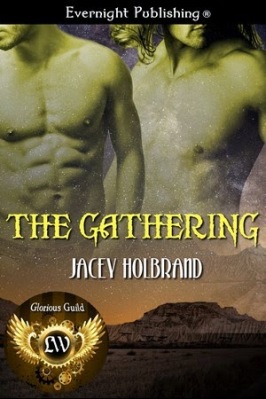 Jake Landry is interested in having some fun. He’s in Las Vegas, newly single and just off his most recent tour of duty. In Vegas he has met up with his old friend Nicola Goodheart, a scientist and inventor who studies portals, other worlds, and strange beings. Jake has also met and become enamored with Alexander, a gorgeous man with violet eyes. Jake goes with Nic on a portal finding mission, and they all end up in Alexander’s alien world.

Recruiter Alexander Bloodworth is interested in Jake for himself and in Nicola for placement in a pleasure house on his home planet of Aurath. When he hears word one of his people’s enemies are after Nicola and Jake, he goes to save them both, even at the peril of losing his job.

Will they risk their hopes and dreams—Alexander and Jake for a chance at love and Nicola for her career—or will they falter and lose everything anyway?

CHARACTER INTERVIEW!
Hi and welcome – it’s nice to have you here! What is your name?

Where did you grow up? How do you feel about it now?

I grew up on a planet called Aurath. I love my home world but I love Jake and would like to be where he is. Plus, I don’t feel so confined and restricted in what I want to do as I did back home.

Where do you currently live? Do you like it?

I currently live in Las Vegas, NV. It’s quite exciting and I love it even more because Jake is here. The city has come a long way from its days of tent camps and martial law.

What sort of a home is it?

Nicola describes it as a sprawling ranch house. For an Earth home, it’s a decent size. Though I sometimes do miss my father’s mansion and the servants.

With whom do you live? How do you feel about these people?

I live with Jake and his two friends Nicola and Stansbury. Some of my comrades are visiting with us as well. It’s a great group of people. Lots of fun to be around.

Do you have any pets?

No, but I wouldn’t mind getting what Jake calls a Golden Retriever. It’s supposed to be a really great dog to have.

How deeply does your job define you as a person?

Being a recruiter used to be who I was and consumed my life. It didn’t allow me to have what I truly wanted, which is a person to go through life with.

How do you feel, generally, about the opposite sex?

Women are nice. I’ve had fun with them, but my man Jake has turned out to be what I really wanted and my true love.

How did the two of you meet?

Jake and I met when I was chasing down Nicola to take her back for placement in a pleasure house.

“Sounds acceptable to me.” Alexander captured Jake’s mouth in another kiss and the only time he stopped kissing him was to pull Jake’s shirt over his head.

They mimicked each other’s touches—running their hands up each other’s smooth chests, tracing the dips and curves of their muscles, enticing nipples. When Alexander latched onto one of Jake’s hard nubs, Jake sucked in a stream of air. Alexander’s lips on his body were like heaven and hell. Heaven because their silky touch sent delightful vibes through him, and hell because whenever Alexander trailed down toward his pulsing cock, he didn’t take it in his mouth or lick or kiss it.

“Come on, Alexander. Quit teasing me.”

Alexander’s rumbling commands sent more heat racing through Jake’s veins and down into his cock. Jake didn’t know his dick could get harder than it already was, but it had. He gazed straight into the alien’s stormy purple eyes. “I want you, Alexander. I want you to take me in that beautiful mouth of yours. I want you to suck me dry.”

The alien rose from the couch and towered over Jake before he dropped to his knees in front of him. Alexander reached out and grabbed the top of Jake’s pants, then yanked them down and off his body. Jake’s cock stood, bobbing to and fro as he resettled on the couch.

He did as Alexander demanded, then stared down upon the alien who positioned himself between his thighs and stroked, licked, and kissed his cock and balls. Jake tilted his head back, loving the way Alexander took command of his body, his senses. All the colorful twentieth and other centuries’ artifacts fell from sight. The metallic fragrance of the ship disappeared, replaced by Alexander’s heady musk and leather scent. Slurping and sucking sounds along with Jake’s panting breaths and occasional ahs and fuck yeahs filled the room. Jake closed his eyes to savor the exquisite feel of Alexander’s moist and warm mouth on his length.

“God, Alexander. You’re incredible.” Jake breathed heavily, realizing he truly believed what he’d said. Alexander was wonderful and not just in a sexual capacity. The alien had a caring and compassionate way about him that Jake rarely saw any more in anyone.

Alexander licked his way off his cock, grasped it in a semiclosed fist and pumped his hand as he stared at him. “You like, yes? You have a nice dick for an Earthman.”

“Have you seen many?” Jake wanted to be jealous, but it was hard with Alexander’s soft fondling of his penis.

“I have viewed my share. I am glad I waited to bring someone home until I met you.”

Jacey Holbrand believes love comes in all forms and should be celebrated. She’s committed to her muse and writing so she can share those kinds of stories with readers. Hot days. Sexy nights. Come play in her world.

Jacey loves to hear from readers! eMail her: JaceyHolbrand @gmail.com

2 responses to “The Gathering by Jacey Holbrand”