Thanks so much for having me on your blog today with my Christmas Story, Bought for Christmas 🙂 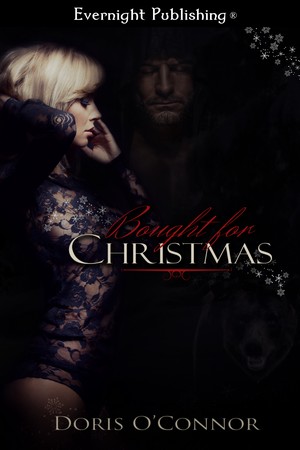 They call him The Beast…

Hunter Monahan uses his scars as a shield to hold people at bay. That way no one can get too close and see the vulnerable man underneath the cold exterior. That is until he wins Emilia in a card game, when her no good for nothing brother puts his sister up for collateral.

Hunter knows that the woman he used to bounce on his knee as a child is far too young and innocent to be tied to a cynical, scarred bear shifter, but he made a promise to her mother to look after her little girl. Besides his bear wants his mate, come what may, and he has a score to settle.

Their contract ensures her submission for the Christmas weekend, but Emilia’s instinctive responses work their own brand of Christmas magic on Hunter.

He never celebrates it, but this festive season all he wants under his tree is Emilia, preferably naked, tied, and entirely at his mercy…

I’m the beast, haven’t you heard….

Christmas is supposed to be a time for miracles and one will surely be needed when Emilia Duncan finds herself sold to the beast to save her father’s company. Having lusted after the much older, enigmatic man for as long as she can remember, spending the Christmas weekend as his submissive will satisfy her raging libido, but can she protect her heart?

Bear Shifter Hunter Monahan cannot stand idly by when Emilia is thrown to the wolves. There is only one shifter who will get his claws into her and that’s him. The contract ensures her submission for the weekend. Too bad his bear wants much more than that.

Hunter is used to hiding behind his gruesome scars, but in the bid for Emilia’s heart, that is not an option this time.  Isolated in his cabin, it’s not just the snow that melts.

“I said you’re mine, kitten,” he finally said, and Emilia’s heart leapt for joy. “You always will be, but I want to see you happy. You don’t need to be settled with a cynical, scarred bear shifter like me, especially as your father will never talk to you again, if you do.” He put his hand up when she was going to interrupt him, and continued.

“No, let me finish. He is your father, and I know you well enough to know that you love him and that good for nothing brother of yours. Despite what you said to them when you left, you could no more turn your back on them than you could stop breathing, and that’s one of the many things about you that I…”

His bear growled, and Emilia forgot to breathe at the struggle she sensed in him. She scooted closer and put her hand on his tense thigh.

A grim smile kicked up the corner of his mouth, and she leant in closer to kiss that spot. A growl erupted from his chest, and before Emilia could blink she was on the floor with him towering above her. Right now he didn’t look very much in control of his bear, and that thought sent adrenaline coursing through her body.

Holding himself off of her with his hands placed next to her head, and his arms locked, he ground his groin against hers and the solid heat of his erect cock meant that Emilia’s hormones took over. Moisture flooded her underwear, and her nipples tried to poke through the soft fabric covering them. As comfortable as her jumper was the fabric chafed against the sensitive peaks, and Emilia bit her lip to stop from whimpering her need.

Hunter groaned and bending his head claimed her mouth in an earth shattering kiss that left her breathless and so needy she was going to scream if he didn’t do something other than kiss her.

He pulled away, and the heat in his gaze sent her arousal into fever pitch. Emilia shifted her legs wider, and they both groaned as he settled himself right between her legs.

“Fuck it, Emilia. I can’t do this anymore. I want you too damn much.”

Hunter’s voice came out distorted, and more of his bear showed as his muscles expanded and he grew bigger above her.

“Then have me, all of me, please.” Emilia gasped her reply, all too aware of the barely leashed aggression that poured out of his very pores. It should send her running, yet it had the opposite effect on her. Beads of perspiration slid into her eyes, clouding her vision. Trapped as she was under his bulk, her clothes felt heavy and restrictive, and Hunter seemed to burn hotter still, as he grew perfectly above her. His nostrils flared and he inhaled roughly, as though he, too, had trouble drawing air into his lungs. Emilia blinked to clear her vision, and she couldn’t tear her gaze away from the sight of his fangs. His incisors grew longer, more menacing somehow in the orange glow from the fire, and she didn’t dare breathe when he dipped his head and ran those lethal teeth along her neck.

Emilia nodded, utterly unable to get her voice to work, and Hunter threw his head back and roared. The vibrations of that growl shook the very ground they lay on, and she locked her ankles behind his ass to enable her to grind her hips against the solid bulge in his jeans. So close. God, she was so close already, if only….

Hunter bucked and dislodged her, until she lay winded, face down on the rug. Hunter yanked her jumper up and her leggings down, and the first hard, stinging swat of his hand on her ass took her breath away. Several more followed in quick succession, and then he lifted her on her knees, and pushed her upper body back down into the rug. Her jumper gave way with an audible rip, as he used his claws to get if off her.

“Do. Not. Move.” Every growled word was accentuated by another swat to her ass. Heat spread across her skin, and she jumped when he replaced his hands with his teeth, while pushing several fingers into her wet pussy.

Emilia whimpered and mewled like the kitten he called her, as he fucked her with his fingers, while marking her body with his teeth just like he’d promised, until her skin was just a mass of hot sensation. Up and down her spine into the hollow of her back, over her ass and the insides of her thighs, until she didn’t know which part of her he hadn’t reached.

Pinned in place by his clawed hand on her shoulder, and his fingers buried deep inside her, keeping her teetering on the edge of her release, she had nowhere to go.

Emilia whined when he withdrew his fingers, and Hunter pushed his digits, slicked by her arousal, into her mouth, and smacked her ass again. Emilia bit down, and the taste of her arousal mixed with his blood, and Hunter grunted his approval.

His claws sliced through her shoulder, while he dug his fingers deeper into her mouth and jaw. The pain just added to her arousal until her whole body felt on fire. Teetering on the edge, she screamed, as he ran his thick cock through her wet slit and then drove in deep.

All other buy links can be found here:

Add it on Goodreads: https://www.goodreads.com/book/show/23609529-bought-for-christmas

One response to “Bought for Christmas by Doris O’Connor”