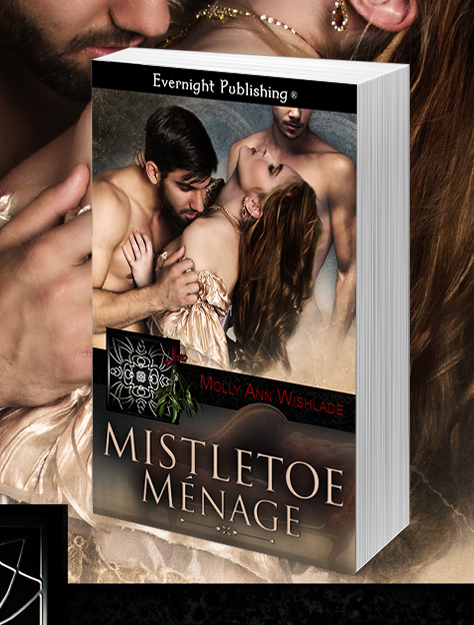 It is 1816. Anne Blackburn is a voluptuous thirty-two year old widow. Due to her family inheritance and the fortune left to her by her husband, she is a wealthy woman, and she moves in the social circles of London’s upper class.

Anne has sworn never to marry again. However, she cannot help yearning to find out more about the pleasures of the flesh. Her deceased husband was more father than lover but she has felt passion once—before she married over six years ago.

Edward Moore loved Anne and proposed to her but when he left London to seek his father’s blessing, Anne was approached by Lord Moore’s lawyer who told her to forget Edward. If she refused, Edward would be disinherited. When Alfred Blackburn asked for her hand in marriage, Ann accepted to set Edward free.

But will her mistletoe ménage become a painful humiliation or the stepping stone into her very own happy ever after?

“Where have you been?” Edward snapped as he sprang to his feet.

Guy laid his hat and jacket on the chair on top of Edward’s then offered a conciliatory smile. “I have begun to seduce her, as you wished.”

Edward stared at the younger man. His face was flushed and beautiful with youth and happiness, and his eyes sparkled silver-blue like the snow under the crisp winter sun. He reached out and caressed Guy’s cheek, rasping his thumbnail against the stubble on Guy’s skin.

Guy glanced at his feet and cleared his throat.

“Guy?” Edward’s heart pounded hard beneath his white cotton shirt as an idea began to unfurl in his mind. “Guy?”

The artist met his gaze and smiled. “She is…as you described. Beautiful, cultured, well-mannered. Though she was also…”

“Tell me!” Edward was surprised at his own tone. He had sent Guy out to Anne, knowing she was a widow now. She had been widowed eighteen months, in fact, but he’d been abroad when her husband had passed, and only returned six months since with Guy in his employ. As a widow, previously married to a much older man, Edward hoped she would now be ripe for the picking. All his memories of Anne were of a tender, voluptuous, sensual woman ready for marriage and mating. He had held back from taking her during their courtship in spite of his burning desire to make her his as soon as possible. He had been prepared to wait until they were safely wed before he bedded her, but then she had given herself to another. A fat, greasy businessman who was surely no match for her elegance and beauty. Yes, it was true that she had no family name to match his own, but he had not cared a jot for that. After seeing his parents’ loveless marriage, Edward had harbored no intentions of marrying for money and social connections. Perhaps he had been a romantic, a dreamer, a fool. Yes…he had been a fool because he had believed that she loved him as much as he loved her. She had broken his heart in two.

As he would hers. With Guy’s assistance.

“I went to her home as agreed, Edward. It didn’t take much to encourage her to allow me to sketch her.” Guy didn’t finish his sentence but Edward knew what he meant. Anne had allowed the artist to see her naked, in all her milky-white-skinned beauty as he had longed to do. Well, he would see her thus. And soon. But it might take one or two more visits from Guy first.

Guy shook his head. “No I did not take her fully. I kissed her and caressed her and tasted her. She really has the sweetest flavor, like honey-cake and madeira wine.” Guy licked his lips and Edward pulled him into his arms and kissed him hard. He pressed his tongue between Guy’s teeth and plundered the younger man’s mouth, desperate to find some trace of Anne. Guy responded to him, running his hands down over Edward’s behind, and squeezing his firm cheeks until Edward knew that they’d continue this until they were both spent.

Edward pulled away and stared into Guy’s eyes. “Will she surrender? Do you really believe she will?”

Something flashed across Guy’s face and Edward wondered at it for a moment. Was it guilt? Regret?

“I believe that she will, Edward. I truly believe that. She is lonely and needy. I don’t think she has been loved as a woman should. She is not like the others.” His golden eyebrows met above his aquiline nose as he frowned. “They are grasping, clawing, and it’s all about them. But Anne Blackburn, she responded so sweetly and so tenderly that it was hard to leave her. The others I could not wait to escape from once I had attended to their needs but with Anne…”

Edward swallowed hard. He could see in Guy that same affection growing for Anne that he had once felt. Was it because Guy was his lover and they were in some way similar in their tastes? Guy did not usually lust after women. He had lain with women of the ton for Edward’s sake so that his plan would work, but when they took a woman together it was Edward who desired the female presence most. Guy just seemed to go through the experience to please his patron. So Edward was surprised that Guy actually seemed to be attracted to Anne. Yet he should not be, because she truly was beautiful in an innocent yet worldly way. She was a walking oxymoron of naïve experience and virtuous passion—a spring waiting to be tapped like the one in Bath which offered restorative properties and improved health to those who drank from it. Would Edward’s mind and body improve under Anne’s tender ministrations? Lord knew that he had not been right since he lost her. He had never again experienced that same joy and hope that she had given him during their brief courtship. And though he knew that he wanted to hurt her, he also knew that a life without her in it would be a dull life indeed. But crush her he would to avenge himself for the way she had torn his heart and life to shreds.

“Undress, Guy.” Edward pulled off his own clothes and watched as his lover did the same. When they were both naked, Edward pulled Guy to him and kissed him again, this time more tenderly than before. Guy ground his hips into Edward so that their erections met and their mutual arousal intensified.

Edward reached around his lover and slipped his finger between the artist’s tight buttocks, sliding it into the tight heat that he longed to penetrate with his cock. Guy gasped against Edward’s mouth. “Let me suck you first.”

“Yes.” Edward allowed Guy to lower him to the bed, then he surrendered to the hot mouth and tongue of his lover, his pleasure all the sweeter because he knew that the very same lips had so recently caressed the woman he loved.

She wants to take readers on the rollercoaster that is life through the creation of vivid characters, relationships and worlds.
She loves to hear from readers.