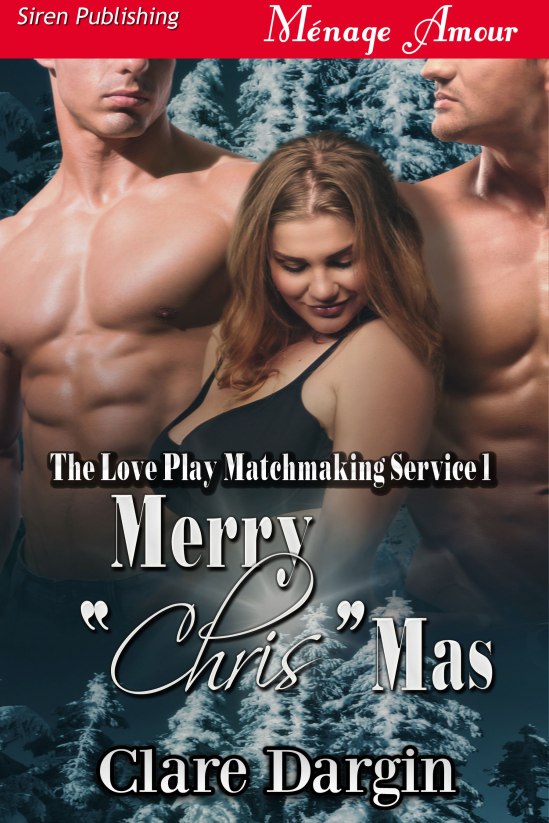 Jilly Reimers wants love but can’t find it. Chris Spinell is a veteran of the war in Afghanistan who suffers from PTSD and a haunting feeling that something is missing in his life. Chris Poole is also an Afghanistan war veteran is ready to break out of his shell but is unsure how.

With Christmas just around the corner, they decide not to spend it alone. Believing The Love Play Matchmaking Service to be just what they need for a night of fun and passion, they sign up. But when the guys show up and see that they’ve been set up on a menage, the only one happy about it is Jilly.

Their consultant, called an Eros, assures Jilly that the service has a perfect track record but she’s certain they’ll be the first ones to get their money back. Will they have a very merry Christmas? Or will the three spend yet another one alone?

Chris S. slipped her undies over her round hips. They slid down her baby-like skin, exposing her shaved mound. More blood flowed to his dick, making whimper.

Through gritted his teeth and clenched his eyes, he forced himself to maintain control. It was getting to be damn near impossible. Everything about her was fucking outstanding. Lips, breasts, skin and pussy. He was ready to fill her pussy with his thick, hard dick.

He slid his finger into the folds of her wet interior. The thin crease surrounded by supple labia oozed moisture from her tight and tiny hole. He slid a finger inside her hole, and her taut muscles quivered at his touch.

She moaned “yes” before being silenced by the other Chris’s mouth. He inched her legs apart. Moving in just right, he tasted her. Explosions went off in his brain. She was pure, simple, clean and honeyed. He wanted to mark her as his own. Delving his tongue in and out of her tight hole, he held her still, allowing her juices to saturate his mouth.

Lifting her legs, he opened her wider, curling her upward, burying his face in her mound. His breaths increased as his heart rate grew frantic. His hard dick, standing at full scale attention, threatened to bust a nut if he didn’t stop.

Pulling away, he set her down gently. “Got to go get a condom.”

The other Chris looked up, his eyes equally as dazed as he felt.

She swallowed, seeming breathless. “My bag, by the wall.”

The time for being cool had passed. Quicker than he’d wanted and less suave, he dashed toward it, finally seeing the stash. Grabbing the entire lot, along with a bottle of lubricating gel, he opened the box and pulled out two, handing one to Chris and keeping the other for himself. Setting it aside, he removed his shorts, exposing his aching dick to the room’s cool air. He grimaced as he slid the latex over his shaft. It hurt with a pain that would only be relieved by what Jilly had to offer. He squeezed the gel, which had the scent of strawberries, onto his palm. He fisted his hand and soaked his condom-wrapped rod with the smooth, thick liquid. The mere pressure of his hand gave him some relief, albeit short.

“Me first,” he said, climbing onto the bed.

Calming himself, he lay down beside her and turned her on her side. Wrapping his arms around her, he pulled her close. He spread her legs apart as she tilted her pelvis back. She melded her body to his. There was so much of her he wanted, not only her body, but her soul, mind, and yes, even her heart.

He took a hand and placed himself at her entrance. Slowly he pushed inside. He grunted and made himself hold back, lest he spill at that moment.

She was so tight. No doubt about it. This was going to be a short run. Inch by inch, he slid inside of her, stopping at the root. His balls drew in tight. He shifted her close and moved in and out slowly. Each movement became stronger as his control slipped. He needed the release, the kind that would give his aching balls sweet relief. Back and forth his hips moved inside her. She wriggled and moaned in response. Their mouths met briefly, tongues swirling, causing his stomach and heart to flutter. He increased his thrusts. Finding his target, she keened her delight.

She pushed her ass toward him.

He grunted, harder and harder. Sliding his hand down to her hard clit, he rubbed it as his panting increased. Pressure built up behind his eyes, his mind went blank as everything in the world seemed to fall away. He couldn’t stop. Harder and harder he pushed, holding her firm and tight.

Slightly dizzy, he held onto her before letting her go. “Are you all right?”

Her kiss eased the butterflies threatening to kill the moment. Sliding out of her, he sighed, relieved. He gazed into her eyes. Instantly he felt the completed connection he’d sensed along. She was the one. And he saw that she felt it too.

Jilly recovered her breath as Chris P. gathered her up into his arms. His musky scent was so spicy and inviting. She buried her face in the crook between his shoulder and neck. She was ready.

“On your back,” he said, holding her.

“Tell me if I’m hurting you,” he said, whispering in her ear.

From her tall Adonis, she was ready to receive all he gave her. Trust welled up within her heart. She knew he wouldn’t hurt her.

Placing her on back like she weighed nothing but a feather, he positioned himself on top of her. A lock of his blond hair obscured his face. She opened her legs. She felt his solid, round tip prod her hole. Panting, he pushed inside of her, his raw strength causing her pussy to clench. Each muscle spasmed to accommodate his thick and meaty cock. She cried out along with him. He braced himself.

Clare Dargin is an author of Science Fiction and Romance and has been writing stories all of her life before being published in 2007. She’s a great fan of the two genres and loves promoting them.

An educator by profession, she possesses a Bachelor’s Degree in English from a major mid-western university. She presently resides in the Midwest and she hopes to expand her writings to include non-fiction, historical romance, and contemporary novels.