Thanks for having me here today!

This version has expanded scenes and an extended ending. It features a fun cast of characters including: a cocky sex demon, a tough female demon hunter in training, and others. Check out the blurb and excerpt below and if it sounds good to you, I hope you’ll give it a read.

Short Blurb:
Cordelia, a demon hunter trainee who daydreams of Christmas, fights to resist Argoth, the sex demon, who inflames her desire and reveals a truth that turns her world upside down.

Long Blurb :
Cordelia is a demon hunter in training. Passing her final test will allow her the freedom to celebrate her first Christmas, but one demon stands in her way. As much as she tries to fight it, to convince herself he repulses her, her body comes alive, betraying her, each time he’s near.

Argoth, a sex demon, is locked in a cell, used as a punching bag for the demon hunter trainees. The only thing he looks forward to is his training sessions with Cordelia. The first time her fist connects with his face, he knows she’s different and that he has to have her, to save her, to make her his.

When Argoth’s truth turns Cordelia’s world upside down, will she give in to her desires or run for her life?

A throaty, sexy chuckle reached her ears. Her skin instantly heated, prickled. Damn it. The cells were soundproof, but somehow the guards or Bix always managed to leave his intercom on when she was in the room. She whipped around and glared at him through the thick glass enclosure which served as his prison. “Shut up, demon.”

His lips turned down in an exaggerated frown. “I couldn’t help myself. Your childish gesture amused me. And how many times do I have to ask you to call me by my name? Say it with me—Argoth.”

It was his fault. The reason she had to keep proving her fighting skills, the reason she hadn’t made certification, the reason she was stuck down there every damn day. She’d learned to somewhat resist the manipulation of several of the others she’d been pitted against but not his. Amused him, did she? Well, let him be amused. He might be her weakness, but she knew his weakness too.

She sauntered over to his cell and slowly pulled her sweaty tank top over her head, exposing her fight-toned stomach. His eyes darkened as they travelled slowly up and down her body before finally settling on her breasts that were clad in only a thin sports bra.

He was a sex demon and had been denied all but self-release since being captured and locked up three months earlier. Denying a sex demon sex was like denying a crack addict crack—except the sex was actually good for the demon.

Her gaze dropped to his crotch and she gulped at the unmistakable bulge there. That damn sexy chuckle floated through the intercom again.

“I’m in perfect control. You’re the one locked up. And don’t call me that.”

“Yes, I can see your perfect control. I’m certain it could cut through this glass and free me. Think of what we could do if you freed me…Delia.”

She followed his gaze to her chest where her painfully hard nipples peeked through the fabric of the sports bra. His voice dulled her good sense and images of what they could do floated through her mind before she regained control and snapped out of it. Goddamn it.

“Whatever. At least I get to go home, shower and find a lover.” She pressed her breasts against the glass, lowering her voice to a sultry whisper. “When he’s deep inside me, fucking me to ecstasy, I’ll think of you.” She blew him a kiss. He growled, real anger contorting his handsome face. “Oh wait. No I won’t.” She flicked his intercom off and flipped him the finger before leaving the room.

Thanks for stopping by and reading! 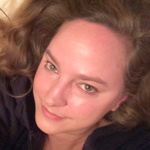 Jocelyn was born in Iowa and currently resides in hot-as-hell Texas. She shares her home with her very own 6’4″ alpha male and varying numbers of spoiled cats and dogs. Teaching one of her dogs to file his nails is one of her all-time favorite accomplishments.

She thinks dragonflies are awesome, spiders are creepy and it’s rumored that she sleeps with a machete by her bed in case zombies attack in the middle of the night.

Jocelyn’s writes paranormal and contemporary romances that include humor, lust, love, and four-letter words on the way to a Happily-Ever-After.

Here’s where you can find Jocelyn on the web:

2 responses to “A Demon’s Gift by Jocelyn Dex”