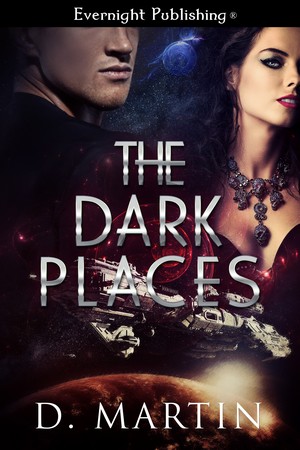 Kailiri Summers narrowly escaped an arranged marriage by fleeing to another planet. She has artistic ambitions, but life isn’t cooperating. Bartending seemed like a good option to stay afloat. She thought her future bleak until Matt Lorins walked into her bar.

One dinner with the charming and wealthy space trader binds her into a passionate marriage bargain. But he’s a man surrounded by mysteries that she can’t unravel. It’s while she’s traveling alone with him on his star ship, isolated far beyond all help, that he reveals a terrifying secret. She must choose between battling the darkness—or losing Matt forever.

“You know, I really hate Harnaru,” I said, thinking about the scorned canvasses stacked against a wall in my studio room’s tiny closet. “I never should have tried painting something I hated,” I muttered to myself. I’d half-forgotten Matt’s presence.

His silence lasted a long minute, as if he was immersed in deep thought. Then he captured my hand in a firm grasp. “Why did you come to Harnaru?”

I glared. “It was a far as my savings would take me in this system, third class,” I snapped. I resented these questions. On the frontier planets, no one so much as poked into anyone else’s past. Everyone took it for granted that you wouldn’t be crazed enough to stray out here if you weren’t trying to outrun bad memories or grim situations. It was common courtesy not to ask about anyone’s past, like I was trying not to do to Matt Lorins. What demon is he escaping out here on the frontier? Mine? A manipulative family.

Matt’s strange dark eyes steadily absorbed my mutinous look. “Would you like to leave Harnaru?” he asked, keeping his intense gaze fixed on me.

“As soon as I save up enough for a ticket somewhere else,” I vowed through clenched teeth.

“What do you mean?” My tone came out brittle, and I was sorry to be acting hostile to Matt, who had just treated me to a wonderful—up to that point—evening.

Was that green haze clouding over his eyes? Was there something wrong with the torch lights? I blinked, and they’d regained their unusual dark aspect with their central fireworks. Maybe that Sauran cordial deserved more respect. I filed away a mental note not to touch another drop that night.

“What I mean, Kailiri, is that I have enjoyed this evening with you and I’ve no desire to see it end,” he said quietly. He drew a deep breath and tightened his arm about my waist. “But it’s your decision as to how we shall go on from here.”

My eyes widened. He was an attractive, intelligent man with beautiful manners—and he hadn’t asked me to split the tab. If he was alluding to spending the rest of the night together, I might be persuaded—if he got me in the mood…. But that other thing he’d mentioned about leaving the planet raised my alarms. The media had inundated the public with stories about off-world abductors and slavers snaring unwary females.

Conscious of the close-by crowd, I lowered my voice. “What does leaving Harnaru have to do with this evening?” I sounded belligerent to my own ears and winced.

Matt gave me a lazy, charming smile before he lowered his head and covered my lips with his. My breathing must have stopped, because my head felt giddy. Spontaneous tingling shot through me under the spell of his warm, questing lips.

He raised his head, and a puzzled frown drew his dark brows together over his compelling eyes. Then he captured my dazed look in his unblinking stare. Gazing into his eyes this close, with his desirable lips poised a mere finger’s length away, felt like drowning in a dark pool lit with green-and-golden fire sparks. An insidious chill crept through my body and surrounded my heart, and I couldn’t suppress the quiver that seized me.

At first I thought the shiver response sprang from a creeping chill caused by cooled-down desert air borne into Marnu upon a sly night breeze. But when Matt’s arms encircled me and drew me closer, as if the diners didn’t exist on the balcony, I knew the chill’s source sprouted from a deep uneasiness. Would harm befall me with this man?

I couldn’t think. One kiss had toppled me into turmoil, and the shivering continued. It was like standing unprotected out in a blinding, wind-driven snowstorm on Dearleth.

Matt rose from the balcony wall, drawing me with him. He guided me from the noisy crowd to a less brightly lit, unoccupied balcony area. He studied me with unsettling intensity before he stepped close and covered my quivering lips with his.

Was there urgent need in his kiss? In mine? With the numbing cold enveloping me, I couldn’t tell.

He moved back, searching my eyes. “Are you afraid of me, Kailiri?” he whispered.

I wasn’t certain if I nodded or shook my head because the tremors had intensified and rocked my body.

He gently grasped my chin, effectively capturing my fear-distracted attention. “You should be,” he said softly….

Buy The Dark Places from:

D. Martin likes science and finding out how things work. She was one of those annoying kids, who drove her mom and teachers nuts with continual questions of “Why?” Her career as science researcher gave her the opportunity to play in labs and create some pretty neat stuff—and maybe advance technology a little.

She believes a person can never have too many books. She reads everything, but is fond of science fiction, fantasy, and romance. World cultures fascinate her. She loves science fiction movies and once wanted to be an astronomer to find out what’s ‘out there’. She lives in the Midwest with her husband and daughter, who are both very understanding when she’s off the planet writing.