Hi there, thanks for letting me drop by. waves madly

I’m so excited. Sybille’s Lord is ready to jump onto your eReader.

This is the third story in the Moon Curse series.

Compromised, the first story is a prequel, and a free read. That’s Theo and Mijo’s story. The rest of the books are their children’s stories as they try to make their family’s fortunes.

The second story is Lord Suitor. That’s Tessa’s story. You can buy that here on Evernight, or from the aforementioned sources.

And now drum roll book 3, Sybille’s Lord is out on 11th September and yes you can get it from Evernight here.

That of course is Sybille’s story. 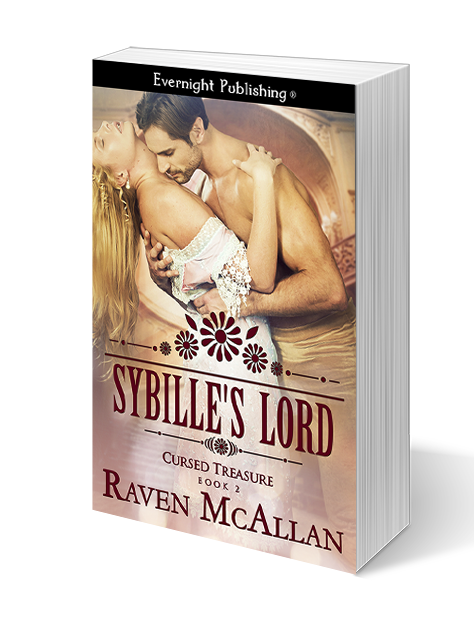 When you have to marry to save your family’s fortunes, and the man of your dreams offers for you, you ought to be ecstatic, right?

Not, if you want it all, you’re not. Having witnessed first hand a love match in the shining example of her parents, Sybille is not prepared to settle for anything less than true love.

Thomas, Lord Jeavons might have proposed, but does he love her? Especially once she tells him her secrets.

For his part, Thom is enchanted, and far from being put off by Sybille’s demands, he vows to do everything in his power to convince her that he is the only man for her—both in and out of the bedroom.

With her family’s good name at stake, can they solve all their issues before it is too late and find their own happy ever after?

“Now where were we? Ah yes you were undressing me. However, I think I’ll do the next bit. Otherwise your education might push ahead faster than either of us anticipated.” Thom gestured to the bulge in his pantaloons. “My pego is so desirous of making your acquaintance, I might spill before he gets the chance.”

Sybille nodded, although she wasn’t really sure what he meant.

Thom grinned, as he hooked his fingers into the waistband of his pantaloons and inched them over his cock. “When a man is as excited as I am, sometimes he can spill his seed even before he enters a woman. Now we all know it is preferable to withdraw from her so…” He stopped. “Ah, do you understand what I mean?”

“Well, of course. If you don’t want a child on the wrong side of the blanket you don’t sow your seed in fertile ground.” Thank goodness for those pamphlets. “So you withdraw.”

Thom finished taking off his clothes. “Exactly.” He collected a ewer of water and a towel, and put them next to the wine. As he moved, his pego bobbed and swayed.

Almost as if it is introducing itself.  Sybille mentally scoffed at herself. Giving a man’s staff a mind of its own. What next? Imagining it was about to speak?

Thom lifted the covers and crawled onto the bed next to her. “Let me warm you up.”

“I’m not… ah well ohhh my…” She spluttered to a halt as he took her nipple into his mouth and tugged. A hot flame of awareness streaked through her. She moved her legs restlessly, searching for a way to relieve the ache in between her thighs.

“Wait, my love.” Thom moved his ministrations to her other breast. He stroked her belly in soft soothing circles and edged his fingers lower, to ruffle the curls that covered her mound. “So beautiful.”

Sybille moaned. The soft voice teased her senses once more as she arched up into his hand.

It was as if she sat beside the bed, watching them. Thom kicked the covers to the bottom of the bed, and parted her legs with his thigh. Then she not only saw in her mind, but also felt one long, elegant finger enter her. She gasped. It was oh so different from anything she had sought to do to herself.

“Impatient.” He kissed her nose. “All things come to…”

“Those who wait. I have waited.”

“So you have.” He added another finger, and then, as she clenched and relaxed her muscles around him, touched her nub with his thumb.

Tremors rushed through her and she writhed and arched off the bed. Thom held her down and increased the pressure. “Fly for me, my love.” He nipped her nipple with his teeth.

That connection from breast to where his fingers teased and pushed, increased tenfold.

Lights flashed before her eyes, stars danced in front of her, and her body was on fire. She was falling over the edge and into that place where nothing mattered except them.

With a keening cry, Sybille fell into the abyss.

I hope that teases you enough for you to think you’d like to read the series.

To find out more about me and my books, here’s my website http://www.ravenmcallan.com 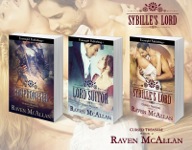