Thanks so much for having me on your blog with my new release Sunshine and Love. Like all of the MM stories I’ve written so far this one took me by surprise.

I’d found a yummy man candy pic to share with my reader group the RavDor Chicks. This hunk to be precise.

I wondered what hero he might be, and in our ensuing brainstorming session we came up with the following. He was a Dom, struggling with who he was. A single dad in need of a nanny. Oh and wouldn’t it be cool if this was a MM….

That’s all it took for my muse to sit up, rub her hands in glee, and force my fingers to the keyboard.

Sunshine and Love was born, and I had oodles of fun, and also shed a tear or two in the writing of this story. Hopefully, you lovely readers will go through the same emotions.

As an aside, if you’ve read Under his Boss, you will also recognise a few familiar names, as they make an appearance in this story. 🙂

Now, to quote Jordan…Sunshine and Love is all you need…. 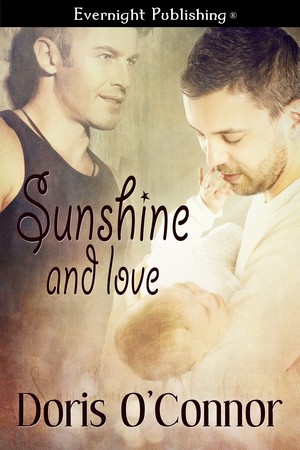 He needs a nanny not a submissive…

Aaron Gibson is struggling with his many hats—single dad, business owner, Dom. His desperate search for a suitable nanny for his daughter Sunshine grinds to a halt when Jordan Carole walks into his office.

This inked biker is certainly not your ordinary kind of nanny, but the man’s instant rapport with his daughter convinces Aaron that Jordan is perfect for the job. All Aaron has to do is keep his hands off his nanny—simple, right?

Well, it would be if the two men could ignore the combustible, sexual tension between them. Jordan wants nothing more than to be allowed to take care of his new boss and his adorable baby.

If only he could convince the stubborn man that Sunshine and Love is all they need.

This close to the man he loved Jordan lost his composure, and before he could lose his bottle, he smashed his lips over Aaron’s. The other man’s surprised grunt granted him access, and Jordan wasted no time in slipping his tongue past the cool lips he’d been fantasizing over for weeks now, and deepened the kiss. The very scent and essence of Aaron Gibson exploded on his taste buds, and when Aaron kissed him back, the last semblance of rational reasoning fled Jordan’s brain. Tongues dueling and teeth clashing, this wasn’t just a kiss. It was punishment and connection all rolled into each other, as Jordan put all of his emotions into the frantic and ever more passionate kiss. When he ground his erection into his boss’s groin, and felt the equally hard ridge of his employer’s own need, he pulled away to study him. Aaron’s azure gaze was almost black, as his pupils dilated in his arousal, and chests heaving, they stared at each other.

Aaron’s strangled groan broke the last of Jordan’s restraint, and he grasped hold of the other man’s stiff cock. Even through the fabric separating him from his prize, the heat of Aaron’s shaft branded him, and his boss groaned when he rubbed the flat of his palm up down Aaron’s dick.

Jordan dropped to his knees and closing his eyes, nuzzled into Aaron’s groin. Aaron’s hiss in answer and the way the man’s hands fisted in his hair made him bolder, and pulling away he looked up at his boss, while running his hand slowly up his thighs. The muscles bunched under his fingertips, and Aaron groaned and shook his head when Jordan reached his belt buckle and slowly undid it.

Jordan grinned as he pulled down the zipper, and reaching into Aaron’s boxer briefs, pulled out his boss’s cock, and licked across Aaron’s sensitive cock head.

The pressure on his scalp increased, and the slight pain fueled his own arousal, as did the drop of pre-cum that appeared on the slit of his lover’s magnificent dick. Aaron’s cock hardened further in Jordan’s fist, as he slid it slowly up and down Aaron’s thick and heavily veined shaft. The action pulled the other man’s foreskin back, and Jordan licked around the exposed, swollen head. A deep groan and yet more of the other man’s musk was his reward. Bringing his free hand up to fondle his boss’s heavy balls, he grasped the base of Aaron’s peen and hollowing out his cheeks, took as much of him in his mouth as he could.

Jordan closed his eyes and gave himself up to the heady sense of power that being on his knees and going down on another man always gave him, as he drank in Aaron’s unique spicy, salty musk, content in the knowledge that at this moment in time, the man was his and his alone.

When he came up for air, grazing his teeth along the sensitive flesh in his mouth as he let go of Aaron’s cock, he glanced up and grinned at the man who was watching his every move through hooded eyelids.

“Still think we shouldn’t be doing this, Sir?” he asked with a smirk, and gasped when Aaron yanked his head back by his hair.

“Watch the sass, boy, and finish what you fucking started, before I come all over your face, and then tan your damn insolent ass for not taking no for an answer.”

The strain behind those few words spoke of Aaron’s need for him, and Jordan grinned around his mouthful of cock, as he went back down on his boss. Aaron swore when his cock hit the back of Jordan’s throat, and he swallowed around it.

“Fuck yes, just like that.” With those growled words the last of Aaron’s restraint broke, as he took over, and hands buried in Jordan’s hair, fucked his mouth with total abandonment. Relaxing his throat muscles Jordan relished in the feel of being used for this man’s pleasure, and gave himself over to the satisfaction to be found in that. The pain in his dick added to the sensation overload, as did the sound of the door opening, and the soft feminine gasp that barely registered over the roaring in his ears. He was so damn close to coming in his pants like a randy teenager it wasn’t even real and the knowledge that someone—no doubt Nicole—was watching him go down on Aaron made the whole thing ten times hotter.

Grasping hold of Aaron’s ass cheeks he renewed his efforts to make the other man come, and when the muscular globes clenched under his digits, and Aaron thrust into Jordan’s mouth in one last, un-coordinated move that threatened to cut off Jordan’s air supply, he knew he had him.

“I’m so sorry. I … I’m sorry.” Nicole’s bumbling apology registered as Aaron pulled his cock out of Jordan’s mouth and yanked his trousers back up with another muttered curse.

Jordan couldn’t help it. Looking across at a red-faced Nicole who still peered at them through the slightly open door to Aaron’s office he winked at her and burst out laughing when she turned even redder and shut the door.

For all other Buy links please check the book page here.

Happily married for the last twenty-five years, she lives with her husband and their brood of nine in a far too small house filled with love, laughter, and chaos.

Stalk her in these places:

2 responses to “Sunshine and Love by Doris O’Connor”