Congratulations to my fellow author Nicola M. Cameron on her new release, which is the answer to an incredibly tough writing challenge I would never have the time to take up.

Let me just say this: You rock, Nicola!! *fist pumps*

Secondly, EoS was prompted by a challenge. Some of you may remember a certain author kicking off a kerfluffle in September by putting up a GoFundMe fund in order to write full-time. Which is totally cool, and I support the Patreon concept 100%.

That being said, the writer demonstrated a, let us say, unrealistic worldview on professional writing. After receiving both even-tempered remonstrating and plain old ridicule, she lashed out at her critics with the following:

“I’d like to challenge each and every one of these wonderful women to a writing contest. How about an 80K (that’s 80,000 words people, not dollars!) novel. It needs to be fully edited, proofed and a professional cover designed for it. Oh, and they have only 6 months to do all this. Ok, go.”

Well, I can’t pass up a challenge. I announced that I would go one better and finish an 80K novel, have it fully edited, proofed, and provided with a professional cover in six weeks, and release it as an ebook and trade paperback in November.

Let me take a moment to point out that every writer has his or her own speed. Some write fast, some write slow. Any speed you write at is fine. You do you, baby. But taking an 80K novel from zero to “Whoops, it’s on Amazon” within six m/o/n/t/h/s/ weeks is just not as impossible as some people seem to think. Part of this challenge was to show that it’s possible to do this without sacrificing quality, and while still maintaining something of a life.

I will be perfectly transparent here and state that I did not make my original six-week deadline (due to a killer sinus infection and various stresses on the home front). I did it in seven weeks. Still not bad if I do say so myself.

I’ve also been asked why I’m using Nicola M. Cameron on Empress of Storms. I lifted the idea from the late, brilliant Iain Banks who wrote mainstream fiction as Iain Banks and science fiction as Iain M. Banks. It was a way of differentiating between the two genres without having to use a pseudonym, and I decided to use the same trick here. Nicola Cameron is pretty much associated with MM/MMM fiction by this point, so if you pick up a Nicola Cameron book that’s what you’ll get, whereas Nicola M. Cameron writes MF fiction with occasional forays into MMF. I like to make readers’ lives easier, you see. 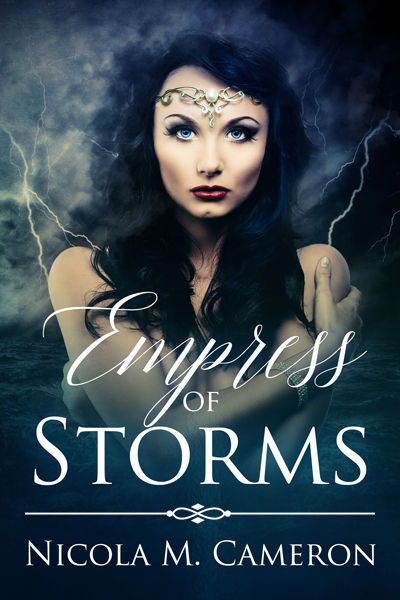 A king who must offer himself as royal consort to fulfill a treaty. A young queen and mage, unexpectedly married to the man she’s loved since childhood. Two countries, divided by geography and united by a political marriage, are poised on the brink of a golden age. But will vicious magic and unexpected betrayal tear both the royal couple and their kingdoms apart?

When King Matthias of Ypres has to fulfill a treaty and provide a royal consort for young Queen Danäe of Hellas, the only royal available for marriage is … him. Can he risk letting a blue-haired witch queen into his heart?

From political necessity, Queen Danäe finds herself marrying the man she secretly loves. Now she must win the heart of a king, prove herself as a mage, and defeat the enemies that threaten them both.

“You’re not what I expected, Danaë.”

“So I gathered. You’re different as well. And I’m very pleased with that.” She reached out and tugged at a curl of his chest hair. “So, shall we try this again?”

“I think we should.” He held up the taper. “With the light or without?”

“With, if it’s all the same to you. I want to enjoy the sight of my new husband.”

“I suspect I’m the one who will be doing the bulk of the enjoying, but as you wish.” Matthias put the candle back on the side table. He was now cast in shadow, but Danaë could still see him well enough. He slid down until he was on his side facing her. “I’m afraid I’m out of practice with bedroom matters. What would you like to do now?”

She thought. He hadn’t kissed her yet, at least not above the collarbones. “I’d like a proper kiss. The one you gave me after the ceremony may have been acceptable for public consumption, but I hope it’s not how you kiss in private.”

“It isn’t.” He moved closer, stroking her shoulder with a finger. “And my apologies for that. I suspect I’ll be apologizing for much of what happened this day.”

“No apologies are needed if you kiss me.”

He did, a sweet brush of lips that made her mouth tingle with anticipation. The next kiss caught her lower lip between his. He sucked gently on the plump flesh, letting it slide free with a soft pop. Their faces were too close to see him smile, but she could feel it somehow.

“You have honey in your kisses, Danaë,” he murmured.

“Only for you, Matthias.”

She dimpled. “Kiss me again and find out.”

This time his kiss was stronger, hungrier. She responded with an equal need, cupping his cheeks and immersing herself in the intoxicating taste of Matthias’s mouth. He tasted of wine and the roast from dinner, and some secret flavor that was unique to him, something dark and very male. It was perfect, sating a hunger she hadn’t known she possessed. She fell back against her pillows and he followed, their tongues sliding against each other in a twisting dance.

He finally pulled back, gasping. “It’s a good thing I didn’t kiss you like that earlier today,” he said. “I would’ve taken you in front of the entire cathedral.”

“Perhaps a bit more than the nobles of Ypres needed to see,” she agreed, breathless. “Not to mention my brother and Patriarch Reniel.”

Matthias tilted her chin up, nuzzling the soft skin of her jaw. “He would’ve had me building shrines in atonement to the end of my days. And your brother would have run me through.”

“Which would have caused an unpleasant international incident.” She arched when his mouth hit a sensitive spot on her neck. “Not to mention I would have to have him executed for killing my husband.”

“It’s a good thing we avoided all that, then,” Matthias agreed, licking delicate spirals on her skin down towards her breast. He stopped at the point where the flesh began to mound and kissed his way to her nipple. Dragging the very tip of his tongue around the areola, he then flicked it across the stiff little nub. “Best we save such things for the privacy of our bed.”

Nicola Cameron is an expatriate Chicagoan who has lived in England, Canada, Holland, and Sweden, and keeps a confusing amalgamation of languages in her head as a result. Currently located in the clavicle of Texas, she has finally mastered the proper use of “y’all,” much to her Chicago family’s dismay.

2 responses to “Empress of Storms by Nicola M. Cameron”