Congratulations to my fellow Evernight author Ravenna Tate on her new release! 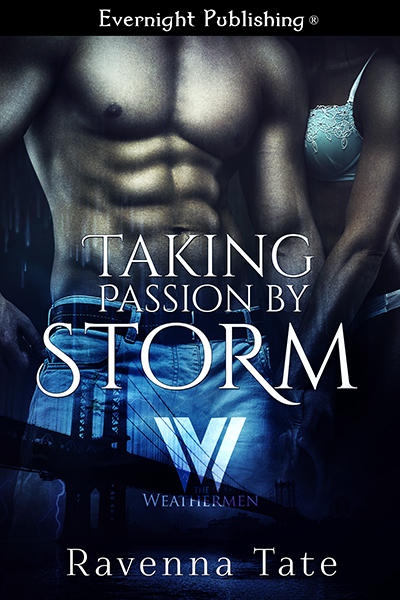 When Nadine Jarvis’s father disappears in a tornado on the surface during his Storm Trooper duties, life-long friend Addison Carlyle puts together a search team. Nadine convinces him to let her come along, where she embarks on a journey that changes her life forever.

Addison is part of a group of friends financing the efforts to put a stop to The Madeline Project. The program now has a mind of its own, thanks to a virus called Tommy Twister. These men have power, resources, and money, but they’re as ruthless and possessive as the storms ravaging Earth.

Addison brushed his hands down her back to her ass, grasping her cheeks. The gesture sent a gush of wetness to her pussy, and her clothes suddenly felt too tight. He released her mouth and planted soft kisses along her jaw line.

“You have on too many things,” he said softly.

“Should I have come here naked instead?”

“Yes.” His mouth brushed her nipple through the fabric of her tank top. “Next time, wear nothing.”

“What if your staff sees me?”

He kissed both nipples, and she gasped as they began to tingle, sending tiny electric jolts straight to her clit. “Doesn’t matter. Better yet, next time be in here already with me. You don’t need your own room, do you?” He grasped her breasts through the top and kneaded them, his expression full of hope.

“No.” She could barely think let alone speak. “No, I really don’t need my own room.”

“Good.” Addison lifted her tank top over her head and tossed it onto the floor. She hadn’t worn a bra on purpose, and was now glad she’d made that decision. “Because I don’t want you to leave my side. I may have to take you to work with me.”

“What about my job?”

He frowned. “Too many questions and not enough kissing.”

She clung to him again as he captured her mouth once more, shoving his tongue into it. In a move that felt bold, she moved her hands to his torso and rolled up the hem of his shirt. She was rewarded with a low, sexy groan as he released the kiss so she could remove the garment.

She undid his jeans and slid them down, giggling when she realized he wasn’t wearing underwear. He was also barefoot, so that only left her shorts because she hadn’t worn panties or shoes, either. “Would you like me to take these off, or do you want to?”

His grin sent fresh wetness to her pussy. Before she could react, he lifted her off the floor and deposited her on top of the comforter. Then he dived between her legs and raked her pussy lips and inner thighs with his teeth, until Nadine was sure she’d go out of her mind. It took him way too long to remove the panties using only his teeth. By the time they were off, she was soaked and so ready for him it was ridiculous. 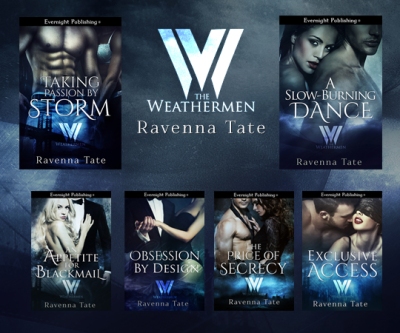 2 responses to “Taking Passion by Storm by Ravenna Tate”