Congratulations to my fellow Decadent author Thea Landen on her new release! 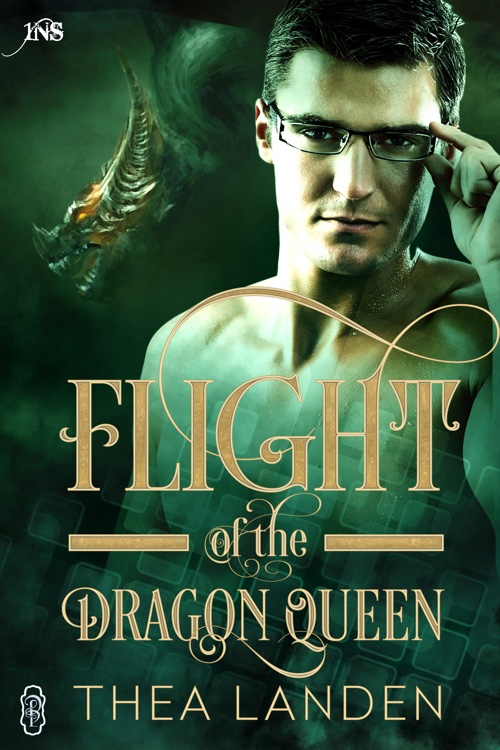 For his entire life, Caleb has always been more comfortable surrounded by books and games than other people. When 1Night Stand is recommended to him, he contacts Madame Eve but is too shy to actually meet any of the women she finds for him. Together, they reach a workable solution: a simulated dating experience in a setting reminiscent of his favorite stories.

After following Madame Eve’s instructions, Caleb finds himself in a vivid fantasy world, complete with a damsel in distress who needs rescuing. His objective is clear, but he must find a way around the many obstacles standing between him and Alizeira, the mysterious woman imprisoned in an underground cell.

While working on his plans to save her, Caleb spends time getting to know Alizeira beyond her role as prisoner, and a mutual attraction develops between them. He is unsure whether she’s a real person playing a part like him, or if she’s simply one piece of the elaborate simulation that’s been programmed for his date. Setting her free is the first step to discovering the truth, but how many secrets is Alizeira hiding?

After racing through a narrow alleyway, we emerged at the edge of the manor grounds, facing the meadow I’d first landed in. Spectre slowed down, and I stared out over the sprawling fields. “Which way from here?” I asked.

Alizeira leaned over my shoulder. “We need to get to the river.”

I searched the horizon for some clue. Mountains stretched above the wide panorama in every direction, but I had no idea where to find the water. “Do you know where it is?”

“I think it’s that way.” She gestured ahead of us and to the left. “But I don’t know for sure.”

I pulled on the reins until Spectre faced where she’d pointed. The discussion about how to proceed, though brief, had cost us precious time. Beneath the horse’s feet, the ground rumbled, the vibrations reverberating up through his legs to where I sat. Angry shouts and hurried hoof beats traveled to my ears. Our pursuers had found our trail.

Clamping both knees around the saddle, I gave his ribs another nudge with my boots. “Come on, boy,” I whispered in his ear. “Let’s see what you can do.”

He followed my commands, and we set out across the open grasslands. Without the hazards of overhanging roofs or gnarled tree roots poking up from dirt paths, Spectre galloped even faster than he had before. Wind mussed my hair and stung at my eyes, and so much adrenaline coursed through me I could barely breathe. Despite any minimal discomfort, the rapid pace and the woman riding with me awakened something deep inside. We embarked on the thrilling adventure I’d dreamed of.

Speeding through the tall, yellowing reeds with the sun blazing overhead, I could push aside the dangers we fled. Alizeira reminded me we’d yet to arrive at a safe location. “The guards are still following us.”

“We’ll be okay.” I yanked on the reins and gritted my teeth against the wind.

The flat landscape of the fields we traversed seemed never ending. I squinted into the distance, but discerned no landmarks or signs. What happened to this river, anyway?

“Hurry!” Her fingertips dug into me. “They’re getting closer!”

Though tempted to turn around and see for myself, I didn’t want to risk losing my balance and falling off the horse. Spectre wouldn’t be able to maintain his lightning-fast speed forever. I’d almost given up hope, but then I spotted the first glints of silvery rushing water up ahead. “There,” I shouted.

The roar of the river crashing over the rocks mingled with the thunder of the hoof beats behind us. Before I could say anything else, the arms circling me loosened. Cool air flowed over my back, and I realized I rode the stallion alone. “Alizeira?”

Spectre skidded to a stop at the edge of the riverbank mere seconds before we would have fallen into the current. I saw no way to cross to the other side, nor did I see any sign of the woman I’d promised to save. Without dismounting, I scanned the area behind me in case she had fallen. She’d disappeared without a trace. “Alizeira!”

The army of soldiers on horseback stampeded toward me, their mounts kicking up clouds of dust and dirt as they closed the distance between us. Captain Sampson led the pack, straddling a steed that, while fast enough, paled in comparison to the stallion I’d stolen from him. As he gained ground, he used one hand to unsheathe his sword and raise it in the air. I pulled on Spectre’s reins and looked around for an escape route, but I was trapped with no way out.

Thea Landen lives in New York with her husband and two children. A former educator, she strives to encourage creativity and passion in all those around her, and uses writing to help inspire. Though she reads and writes in nearly all genres, she has a special fondness for science fiction, fantasy, and adventure and anything that pushes the imagination beyond its usual limits. When she’s not writing, or thinking about writing, her hands and mind are occupied by either yarn crafts or role-playing games.