It’s been a wild wicked ride for me. When I first had the idea for Cuffed and Collared, it sat on the backburner for a bit. My mind swirls with ideas and hops around quite a bit. The spark happen when I saw a very inspiring photo on Facebook which I can’t share because I don’t own the pic. Needless to say, that’s the first spark. The second spark happened because of Lila Shaw. I love her succubus books. Instead doing something with those little devils, I turned myself to the male side–incubus. This is the second one I’ve done, though the first one was m/f. I love the mythos behind it and honestly, you can take it to new heights. I love writing every spectrum of erotic romance and my last m/m had been released some time ago. This one took a dark turn yet still ended in a HFN. The journey to get there, however, is littered with suspense. Enjoy!

A creature born in sin and debauchery, Markus Theo doesn’t care which orifice sates his incubus lust. After all, in the city’s lower echelon no one pays attention to a petty thief sucking on souls so long as his victims remain breathing—until a sexy half-incubus cop cuffs him to table for more than questioning. A prison cell is the least of his worries when tempting Detective Leo Vincent collars him and ignites a hunger like no other. Something stirs beyond the carnal greed and one kiss brands his damned soul.

Lost in a world of submission and sin, Markus will do anything for his lover—even infiltrate the underbelly of an incubus crime operation. He never expects to confront a piece of his past that could destroy everything. Torn between losing Leo or his anonymity, Markus prepares to sacrifice his freedom for the one man he truly loves. 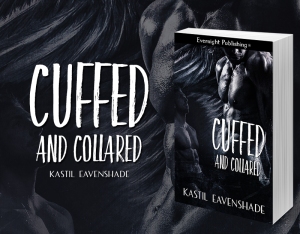 No sooner did I enter when my lunch locked the door and spun me around. He slammed me against the wall. His mouth covered mine, his tongue forcing its way between my lips. Aggressive lovers were a special niche for me. With his pent up energy, I would be able to feed and leave him walking. His hands fumbled to undo my pants and I offered no assistance. While beguiling him would make him submit, I wanted the brute to have complete control. A willing partner by incubus prodding wasn’t as savory to the appetite for me.

My pants pooled around my ankles. He fisted my impressive cock, still assaulting my mouth. His fingers yanked my hair back. As if I would resist his onslaught. Humans. So predictable in their dominating ways.

His grunting intensified, and I inwardly smiled. Struggling, I got my desired reaction. My head banged against the wall. He demanded my utter surrender. His stare had lust etched in his black irises.

“Give me that ass.” He reached in his jacket and retrieved a syringe. Sweet heaven, he was prepared with lube. I grasped the sink. His meaty paws manhandled my bare cheeks. He rubbed against me, his hips gyrating with carnal need. I ground my teeth together, trying to play the part but if he came in his pants, I would go hungry.

“You going to hump me or fuck me, pussy?”

My words earned another yank of my hair.

“On your knees.” He maneuvered me forcefully, my hair his steering wheel. The room stunk of testosterone. Undeniable hunger pounded on my damned soul. His cock was free of his leather pants, rock hard and thick.

“Suck it. I’m going to fuck your mouth, bitch.”

Oh, talk dirty to me.

I constricted my throat and gagged. Not painful by any means, just not as enjoyable. He would not get the better of me.

“Fuck yeah.” He thrust a few more times before withdrawing. Saliva dripped from his tip. Again, my hair was his manipulation tool. Bent over the sink, he inserted the syringe into my ass. Cool liquid splashed inside before he buried his cock inside me. My shoulders were his stabling point, the delightful hair pulling at an end, as he pounded me furiously. Moans emulated throughout the bathroom. I hadn’t been fucked this good since before Donnie. As much as I loved fucking, being on the receiving end drove me to better heights. My victim tended to be more pliable and unsuspecting of my true nature. His base want for raw, sexual debauchery coupled with my unique musk ensnared him. I drank my lover’s essence with slow precision.

The slap of flesh on flesh echoed off the walls. My cock twitched as he bent over my body to drive in deeper. The energy flowing from him was bliss. His growls signaled his near completion. Fear that he’d pull out and deny me the gateway to suckling on his soul loomed. His breath was hot on my ear. I turned my head and flicked out my tongue. Sloppy and uncontrolled, he licked the corner of my mouth. One last groan and with a violent thrust forward, his cum flowed. I sighed as his essence flooded through me at an alarming rate. My raging hunger almost unseated my control but I reined it in.

“You’d be a good little pet to have around.” He chuckled and gave another thrust before retreating.

Available for purchase at:

Kastil Eavenshade is multi-published author pandering her romantic shenanigans. When not catering to the whims of three rescued kitties, she’s dreaming up her next heart-beating tale. No period in history–past, present, or future–is safe from the clutches of her muse.

Her passions beyond writing are drawing, cooking, and watching Pittsburgh Penguins hockey. She credits her parents for her free spirit as they’ve always supported her in every aspect of her life. Without them, she wouldn’t be here. She finds pleasure in writing anything from fantasy to romance-which sometimes parallel each other. Find her on Facebook, Goodreads, her blog The Eclectic Zaftig Chick, and Amazon.