Congratulations to London Saint James on your new audio release!

Thank you so much for having me on your blog today to celebrate my new audiobook release, Trouble in Paradise – A Paradise Ranch Novel. One of the questions I get asked the most is, “How did you get into writing?”

Like many authors, I’d always scribbled down things—little stories and such from a young age. Are people born to do a certain thing in life? Maybe. Because something about the art of storytelling has always been a part of me, even when others didn’t want it to be.

In the second grade I wrote my first short story, and trust me when I say the endeavor wasn’t encouraged, and my teacher didn’t necessarily think my big imagination was a good thing, so I put writing and my imagination on the shelf to gather dust and whither. As I grew a little older, I started writing again, and at the urging of my eighth grade English teacher, I wrote my second short story inspired by a love song. Then as life does, it moved on. Again, I put all the childish things away, writing being one of them. I needed to do “the sensible thing.”

Once in college, I took another foray into writing and the scribbles became an outlet for me. It became an even bigger outlet for me when I got a job in my chosen field. Writing was a stress reliever. An escape. Nothing more. I was living in “the real world” doing all those sensible things people told me I needed to do. But, the thing was, I always came back to what I loved—all that writing nonsense.

In 2010 while working forty-plus-plus-plus hours a week, I worked up the courage, and decided to submit a short story to a publisher for an anthology call. I figured what’s the worst thing that could happen? I pictured the rejection e-mail telling me in polite terms my story sucked, but that didn’t happen. *Smiles* My story was accepted for publication, and I’ve literally never stopped writing.

In the end, I followed my heart and all those non-sensible things people in my life tried to discourage me from doing. Now, I do what I love. I write full time, have won awards and honors for my writing, and have even been on bestseller lists. I also have enough WIPs (works in progress) to keep me busy for a long, long, long time.

So, what have I learned along the way?

It’s never too late to dream, and never too late to believe. Never let people discourage you from achieving your dream. Never give up. Never stop working toward your goals. Do what you love, and love what you’re doing. Nothing in this life is unattainable, not unless you make it so. 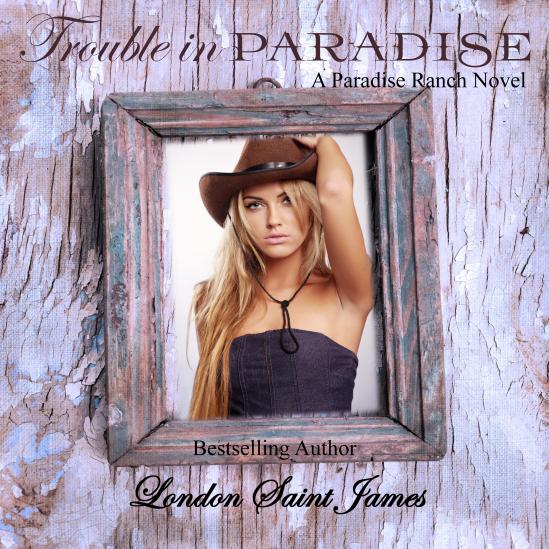 If you know what’s good for you, you’ll go back to Dallas.

Since coming home Sutton has inherited herself a heap of headaches, two bossy men who want her for their own, threatening notes, and a whole lot of trouble in Paradise.

Having Doc McNab as competition, being ten years Sutton’s senior, and under her employ, meant the deck was stacked against Flint Palmer when it came to winning the sexy, vivacious Sutton as his woman. No way would she be interested in an old, worn-out, ex-rodeo cowboy like him, but that wasn’t going to stop the man from trying.

With the exception of the pretty as a picture, Sutton Callaway, Kale McNab’s childhood sucked. He’d been jerked up more so than raised by his ex-convict of a father, eventually leaving the girl and West Texas behind. Now, he’s all grown and back in Sutton’s life, willing to do whatever it takes to stay there.

Listen to a sample:

What do readers have to say about Trouble in Paradise?

5 sexy stars!! Whoo I may need to be hosed down after reading this sexy, sexy book!! Melissa –Amazon
Whoo! What a twisting turning, one hell of a cliff hanger, roller coaster ride that was. Cutting Muse Blog Review
It’s a must read book. Shelly – Goodreads

Behind her, hard heat pressed along the length of her bare back, ass, and thighs.

Her eyelids flittered open. Everything seemed hazy. Off kilter. She rubbed at her gritted eyes. Blinked. Glanced around. She was in bed, lying on her side. Silver light trickled in through the sheer-lace curtains and slashed provocatively over her naked torso.

When a large, warm palm slid up the contours of her body to cup a breast, her nipples pulled tight and hardened.

“What are you doing?” she asked in a sleepy voice.

His nose nuzzled into the hollow behind her ear. Chills scattered over her sweat-dampened skin.

“I think we both know what I’m doing.” He squeezed needy flesh between expert fingers and licked the side of her neck before sucking there.

“Shh…Don’t fight this.” He rolled her over, onto her back—his chiseled features coming closer—green eyes glittering in the moonlight, and brushed his nose over hers. “Give me what I want, Sutton,” he said, gripping her face between his hands. “What we both want.” He brushed his lips across hers. Urging. Tempting.

When she opened to him, his tongue delved past her teeth. She moaned at the sensation—the slick glide of his tongue against hers. He tasted of expensive wine, and mint chocolate, an extravagance no woman could afford.

Settling against her, tucking his bigger body between her wanting thighs, he devoured her in the most delectable way. He speared deep, taking her breath, fucking into her mouth, rubbing his tongue against hers before sucking on the tip. She was consumed by him. Fire snaked up her spine, and just seconds before she burst into flames, he backed off. Nibbled her lower lip.

Unable to help herself, she arched into him, and lodged her hands into his satin-soft hair.

“I’ve always wanted to taste you.” His black-velvet voice was desire roughened as he kissed his way along the line of her delicate jaw. “Feel you pressed against me.” He licked her chin. “Be buried deep inside of your sweet little body.” His mouth pressed to the pulse thump-thump-thumping in her throat. “Mm…” He slid his mouth over the apex of her breasts. Traced the tip of his tongue around her areola.

“Tell me you want this, Sutton.”

As though a reward for her response, he slipped his lips over an erect nipple, tongued and sucked while the wide head of his cock made progress against her clit, sending heated spikes of pleasure to quiver low in her belly.

But, crazy or not, she plunged her hands into his hair once more, tugging until he returned to her mouth for another deep, probing, hungry kiss. The mastery of his mouth and tongue caused her body to tremble against the steely strength of his.

He pumped his hips, sliding his impressive length along her slick feminine folds. “You’re so wet for me,” he said, brushing strands of blonde hair from her face. “Open your eyes, darlin’.”

Her eyelids fluttered open and she gazed up at him. “We shouldn’t be doing this.”

“Yes. We should.” He ran the pad of his thumb over the swell of her lips. She slipped shaky fingertips down the furrow of his spine. Need rumbled through her like a summer storm. She wrapped her long legs around his tight waist. He muttered a low, sexy curse through gritted teeth before saying, “Tell me to fuck you.”

Her words were lost when he ground himself against her throbbing core.

“Yes,” she whispered on tremulous lips, giving in. “Do it.”

With a smooth glide, his warm hand moved along her ribcage, gripped her hip, angling her tightly into him. His other hand tangled into her hair, securing her while the pad of his thumb rhythmically brushed along her temple. He pressed the wide head of his cock to her snug opening, parting her sex, and stopped to stare into her eyes—their heated breath bathing each other’s mouths and chins…

What was he waiting for?

“Tell me what I want to hear, Sutton.”

Two words fell from her in a breath. “Fuck me.”

With one hard thrust, he impaled her, stretching and filling her completely until the plump lips of her pussy were at the wide root of him.

She cried out in pleasured bliss. He groaned her name. Her fingernails pressed into his shoulder blades so hard she’d probably leave marks.

Fumbling, Sutton reached over to the bedside table, her heart hammering in her throat, and smacked the button on the alarm clock before she threw an arm over her eyes, willing herself to settle down.

She lay there, her body needy and unsatisfied. Out of all the delicious men in the world, why him?

Her hand slowly slipped over the swell and dip of her stomach, stopping at the waistband of her panties. What in the heck was wrong with her? No way would she give Kale McNab the power over her fantasies or her own satisfaction. She considered something in her psyche had to be flawed to even ponder the idea of her fingers finishing where her dream left off, because if there was one thing she knew without any doubt, she couldn’t freaking stand the man.

After taking a deep breath, Sutton sat up. She was sporting a pair of erect nipples beneath the ribbed tank top she had on. The floral sheet was tangled into a ball at the end of the mattress. The fitted sheet had dislodged from the corner. Her pillow was missing a pillowcase and dangled half off the bed.

Exasperated, Sutton flung her body back—head hitting the mattress and sighed. Just once couldn’t she have a sexy dream about Chris Hemsworth or Joe Manganiello? Or better yet, how about being bookended by both of them?

She allowed the visual to dance around inside her head for a moment. Regrettably though, she’d set the alarm for the butt-crack of dawn for a reason. She had roofers coming to start on the ranch house this morning.

Glancing over at the clock with one eye, she grumbled nonsense from under her breath. It was time to get up. There would be no such luck in the Chris/Joe naughty fantasy department today.

You can find out more about London here: