Congratulations to Andi Bremner on your new release! 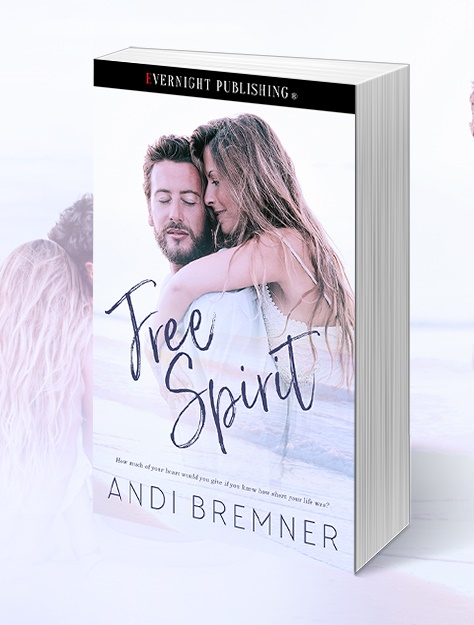 How much of your heart would you give if you knew how short life could be?

Juliette Reynolds knows that life is a precious gift that could be snatched away at any moment. A survivor of childhood leukemia she lives her life seeking fun, adventure and love at every turn making no commitments and never settling in one place for too long in her quest to experience life to the fullest. Her latest adventure has bought her to Myrtle Beach where she meets Noah Daniels.  Having lost his wife in a freak boating accident three years ago Noah also knows how quickly life can be sucked away.

But Juliette, with her zest for life and eternal optimism, is determined to wake Noah up and bring him back into the world of the living.  That is, until it seems like living is what she might not get to do.

“I’m going to be completely honest with you, Juliette,” Noah told her as soon as they were back in his pickup truck. “I don’t want to take you back yet. I want to take you home. Home to my house.”

He growled and started the truck up. Before he pulled out from the curb though he looked over at her, wanting to make it clear, needing her to know before … so that she didn’t have any false expectations of what this was and of what to expect.

He narrowed his eyes. “You do?”

“No commitment,” she said. “I get it. I don’t want that either, although I do like the idea of you fucking me hard.”

Noah growled again, his eyes roaming over her face taking in every exquisite detail. Where the hell had this girl come from? She was perfect. Perfect for him. Sexy, gorgeous, oozing a zest for life that was severely missing from his and a commitment-phobic as well. Well, not so much a commitment phobic but more an avoider … like him. It was like Providence had bought her to him.

Noah drove the short distance to his house his mind fixed on nothing else but Juliette. When they arrived at his house he ran around to open her door watching her face as she took in the small, single story bungalow he called home.

“Of course you do,” he said, fumbling with his keys and unlocking the door. Immediately Loop, his dog, flew at them, covering Noah with licks and racing around like a loony in her excitement to have him own. Then she turned her attention on Juliette, doing the same for her.

“Is this your guard dog?” Juliette laughed, ruffling the hair on the back of Loop’s head. “She is useless but oh so cute!”

Juliette crouched down and scratched Loop’s belly as she laughed. “She is so cute! Hello, Loopsy, my name’s Juliette. I guess they call you Loopsy because you are a bit crazy?”

Noah scowled. “She’s completely crazy. I tried to train her, but she’s too nuts.”

“Well you know what,” Juliette laughed, speaking to the dog, “I’ve been called crazy before, too. I think it’s just that we’re misunderstood though. Don’t you think, Loops?”

Noah shook his head, feeling strangely jealous that Juliette was lavishing her attention on his crazy cocker spaniel when he wanted all her attention on him. Grabbing her hand, he pulled her to her feet, ignoring the surprised look on her face.

“I should offer you a drink or something,” he said, his eyes roaming over her face, “but really I just want to take that sexy as all hell dress off.”

Juliette’s pupils dilated, and the dog, it seemed, was completely forgotten. “I had enough to eat and drink tonight. At the restaurant.”

Noah drew her towards him, planting his mouth firmly and possessively against hers. He didn’t bother going gently this time, didn’t bother easing her into the kiss. Instead he unleashed everything he had, every feeling he had as he let his mouth slant over hers, as he forced her lips apart and thrust his tongue deep within her mouth, tasting and savoring her.

Dragging her with him he pulled her further into his house, through the living room and down the short corridor to his bedroom. He’d already closed the curtains earlier and left a low bedside lamp on, which now cast the room in a pale yellow light. Pausing, he glanced at the rumpled bedding wishing he’d made the bed that morning. Not that it mattered, he planned on messing it up very soon.

“Take your dress off, Juliette,” he commanded, against her mouth, “please.”

“I like your manners,” she told him as she pulled back, tugging at the tie around her neck. “You’re such a gentleman.”

“You won’t think I’m such a gentleman,” he grumbled, watching as she slid the dress ever so softly off her shoulders and let it fall unheeded to the floor, “when I’m fucking you senseless and making you scream.”

Her mouth fell open, and her eyes, those pools of sea green, went wide. Noah felt another possessive, almost caveman like grumble building in his chest.

Dropping his eyes, he let his gaze run over her body, pausing at that odd scar a moment before dipping further, moving over her breasts, down her smooth, flat stomach, over the curve of her hips and lingering on the pale blue, lacy panties that covered her center.

Her mouth twitched. “Have you forgotten your manners already?”

His pulled his eyes up to meet hers, swallowing over the thickening in his throat. “Please.”

Juliette grinned, reaching around to unclasp her bra, drawing it slowly down her arms before discarding it on the floor with her dress. She was just about to reach for her panties when Noah lunged at her, his mouth clamping down on hers as he pulled her against him, crushing her against him. Juliette made a small sound of surprise, but that was quickly stifled by his mouth on hers. Stumbling, he led her back to the bed where they fell, his mouth barely breaking its assault on hers as his hands ran the length of her body, cupping and caressing her breasts, pinching the peaks until they stood as hard nubs and Juliette cried out in his mouth.

Her hand slid beneath his shirt, tugging it from the waistband. He pulled back at her insistence and pulled it over his head, throwing it somewhere in the room before he lowered his head back down to hers, relishing in the feel of her soft breasts against his hard chest, the differences between them. How smooth and soft she was against his hardness, how cool her skin was to touch whilst his felt almost feverish. It was almost as if the differences between them made them perfect for one another.

Her hands were running over him, over the hard planes and angles of his body, her fingers tracing the sharpened contours. He felt massive, looming over her, and carefully rested his body weight on his arms even as he wanted to get closer.

Lowering his head, he closed his mouth over a breast, sucking her nipple deep as she arched against him. His hand squeezed and pinched her nipple, and Juliette pressed her hands into his hair, urging him closer as the sounds continued to escape her. God, he loved those sounds she made. It was like angels singing or the sweetest concerto he had had ever heard.

He switched, turning his attention to her other breast, as he ran another hand over her flat belly and wrapped her hip, jerking her against him, lifting her butt from the bed. Then he kissed lower, his tongue running over her skin, licking and then dipping into her belly button.

“Noah,” she murmured beneath him, tugging at his head. “Oh God.”

“Hmmn?” he whispered against her skin as his mouth skimmed the top of her panties,  which were so fine and lacy that they left nothing to the imagination. Not that Noah had to imagine what she looked like. The image of her, naked and dripping wet that morning, had been seared into his mind, into his heart. She was bare, shaved or waxed, he didn’t know, but she was bare. When he tugged at her panties she dug her heels into the bed and lifted her hips allowing him to slide them down her thighs and throw them away.

“Noah,” she whimpered beneath him, shivering a little.

Raising his head, he looked at her, drawing her deep into his memory bank and imprinting her there. Head back, lost in the pillows, eyes closed, swollen lips open and panting, breasts heaving, nipples hardened, legs spread for him, pussy arching up to meet him.

Noah growled, a low rumble in his chest as he ran a hand lightly over her center. She was wet already, and he sucked in a breath. God, could this girl be any more perfect?

Sliding one finger along her folds he dipped a finger inside watching as her mouth fell open and she arched off the bed, legs opening to give him further access. Gently, he pressed a thumb to her nub, circling ever so slowly as she began to writhe and grab at him, murmuring his name. His chest constricted at the marvelous sight unfolding before him, and when he dipped his head to taste her little bit of heaven, he thought he’d come undone.

Her legs were trembling, her thighs clamping around his head as she arched against him, using her hands to press him further closer, searching for her release. He kept his eyes open, watching her, loving the way her orgasm built, loving how she lost herself in him, in his touch, in his mouth. 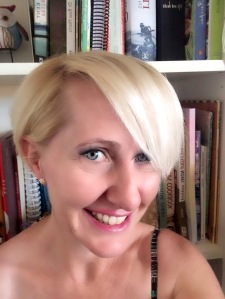 Andi Bremner is a romance writer who is lucky enough to live by the beautiful Indian Ocean in Western Australia with her husband and three children.

Andi grew up with her nose in a book and her head in the clouds.  Her favourite books were the ones that transported her away to another world full of dashing heroes and damsels in distress set in faraway time periods.  Romance, and in particular, complicated romances soon became her favourite novels to read and write and she now writes angst ridden tales of first love with some steamy interludes thrown in as well.

On the weekends Andi can be found ferrying her children to their various after school activities or hiking and camping in the stunning Australian outdoors.

Drummer Girl is the first story in the Moonstone Series. Trinity (Book 1) was published on 1 April 2016.  Stay tuned for Book 3 coming soon.