Congratulations to Naomi Clark on your new release!

Hi there! Thanks for having me today and letting me share a bit about my new release, IN COLD BLOOD. This is a spin-off from my Urban Wolf series, set in the same world but featuring new characters. My goal with every entry in the Urban Wolf series is to open the world up a little bit more. SILVER KISS gives us a good, solid starting point with werewolves. BLOOD HUNT introduces vampires. PHANTON FEARS teases the idea of ghosts, and COLD NIGHT MOON gives us fae creatures (or one, at any rate). With IN COLD BLOOD, my idea was that, well, someone had to be noticing all these weird and wonderful creepy beasties. And someone would be keeping notes…This will tie directly into the plot of the next Urban Wolf book, which will take us back to Ayla and Shannon. The circle of life, etc.

IN COLD BLOOD is the first of a planned trilogy about Phoebe, Aisling, and the Luporum. I already have book 2 mostly planned out (in my head, anyway), but my aim is write that Ayla and Shannon book first. So if you enjoy IN COLD BLOOD, rest assured that there’ll be more from my socially awkward werewolves in love – and the Urban Wolf series in general! – in the future 🙂 Happy reading!

You can find the complete Urban Wolf series, in reading order, at my blog here – http://naomiclarkwrites.blogspot.co.uk/p/urban-fantasy.html 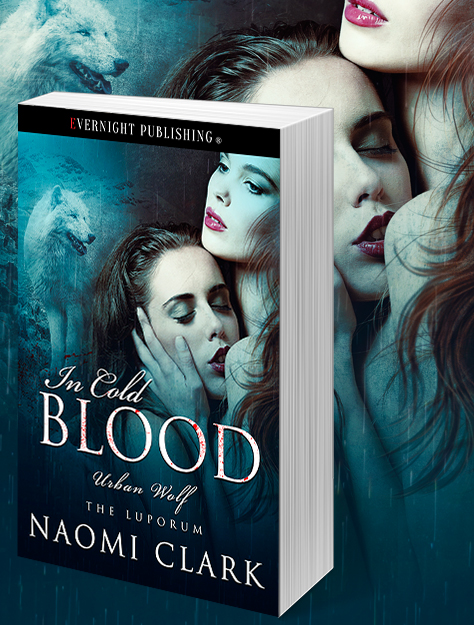 Phoebe Fairley wanted to be a librarian. Somehow, she’s become a vampire hunter. Women are dying across the country and the police are baffled. Phoebe’s just supposed to be gathering information on the deaths, but as the body count mounts, she can’t help but break the rules and get involved. She knows what the killer is—and catching and containing it is vital. If she can persuade the police to believe her, and keep her secretive bosses happy, she stands a chance of capturing a very real, very deadly vampire. Not bad for a werewolf who can’t shapeshift.

Aisling is happy living as a feral wolf. She’s got no time for human affairs, until a mysterious creature attacks her and leaves her in human hands. Now, if she wants her life back, she’ll have to join Phoebe’s hunt. There are just a couple of snags. One, she hates humans. And two, she’s falling hard for Phoebe. With a monster to catch and her own past to protect, will Aisling trust her head or her heart?

The scene inside the barn was surreal. Two big floodlights overhead lit the barn in glaring white. Half the huge space was taken up with sheep, penned off from the drama but still hysterically bleating and milling together. A grizzled man in a tattered dressing gown and Wellington boots – surely the farmer – leaned into the pen, talking non-stop to the frightened animals. Bales of hay were piled high around the rest of the barn, looking to Phoebe like they might come toppling down any second. They formed a rough arena for the main drama. Two more men held down a naked woman. She thrashed in their grip, tossing her matted red hair and snarling with a viciousness that made Phoebe’s wolf cower. This was their victim, this mad, wild thing?

Spalding hurried over to the farmer and Gibbs ran to the paramedics. They had to be wolves, from the strength they were displaying, but the woman was making them work to keep her still. Phoebe hesitated before following Gibbs – at a distance. Observe, Spalding had said. That was fine. Observing was all she was meant to do. The question was, what exactly was she seeing? The victim of a vampire attack or a feral wolf gone mad? She couldn’t help but lean towards the latter. Perhaps the woman thought the sheep would be easy pickings, but something had gone wrong. Maybe she’d been startled by the farmer or a guard dog. Phoebe had noticed a kennel outside the barn, although there was no sign of a dog now.

As she got closer, she saw the woman’s hands and feet were caked in mud, and there were thin red scratches all over her pale skin. Dried blood on her chest, too, although her endless thrashing made it hard to see where the original wound was. She stopped a few feet away, watching as Gibbs crouched down before the woman and – daringly, Phoebe thought – gripped her chin firmly. She was surprised he didn’t get his fingers bitten off.

The woman growled but couldn’t pull free of Gibbs’ hold. He growled right back, with a force and venom that made Phoebe quake. Did they teach that in training?

For a minute, the pair seemed locked in battle, the woman struggling against all three men in vain while she snarled at Gibbs. He didn’t flinch or loosen his grip, and kept his own domineering growl rumbling on, rising in pitch. The sheep grew more frantic and both the farmer and Spalding yelled at them with a mixture of anger and desperation. Phoebe felt battered, all the noise and tumultuous emotion like an assault. She wanted to run. She forced herself to stay, watching as Gibbs tried to inflict his will on the woman.

As much as pop culture got muddled with myth, some things were always true, just as much for wolves as humans. Some people were simply more dominant than others. Gibbs’ laid-back, clownish persona was all gone now as he pinned the woman down with both his body and his eyes. Phoebe would have caved already, if she’d even had it in her to resist. The woman, whatever her mental state might be, was not so easily dominated. But after what felt like an age, she slumped, stopped fighting, and went still.