Congratulations to Elyzabeth M. Valey on your new release!

Although, there were many more, below are five of the pieces which I listened to the most to help inspire me.

As it happens in ballet, behind the beauty there is more than meets the eye. Grisha and Ayla are the same, and I invite you to delve into their story.

I hope you enjoy reading Break Me as much as I did writing it. 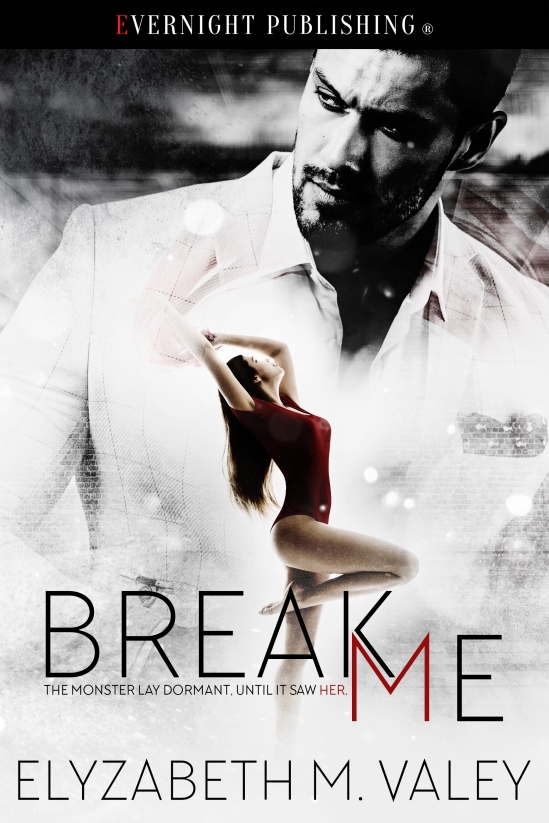 The monster lay dormant, until it saw her…

Every few years, the beast within Grisha Vasiliev rouses, clamoring for blood. When he sees Ayla Clark dancing, her movements exuding grace, passion and joy, he knows he must have her.

Grisha kidnaps Ayla expecting the usual: resistance, tears, pleas for mercy. But when Ayla breaks the mold, his whole world spirals out of control and feelings he thought he could never have again resurface.

He thought she was perfect, but she’s the broken doll on the shelf.

The last thing Ayla Clark remembers is celebrating her performance as Giselle and flirting with the handsome Grisha Vasiliev, the owner of one of the most prestigious ballet companies in the country. Now, she’s tied up and at his mercy, begging for more of his attention, while fighting to keep her own secrets buried in the dark.

Ayla turned on her heel and raced out the door. Her bare feet slapped against the cool floor almost painfully. The glass shard cut into her hand but she didn’t dare release it yet. Lights blinked on as she ran down the hall and up a set of stairs. Tripping, she dropped her primitive weapon.

She didn’t stop to pick it up but continued until the top. She clutched her stomach. It couldn’t be. A thick metal door loomed before her. She lunged at it, screaming and crying, shouting for help, but it didn’t budge.

“You’re going to hurt yourself. The door is pure steel, locked with a key and an electronic panel.”

She spun to face Grisha. He stood a few steps behind her, arms crossed over his chest, eyes gleaming with predatory intent. Her shoulders slumped. A lump formed in her throat.

“Why? You’re rich, powerful. You can have anything you want. Why?” she insisted. “I swear I won’t say anything. This never happened.”

“That isn’t the way this works, sweetheart.”

Her knees gave out and she slid to the floor. Her head spun. None of this made any sense. Grisha towered over her. Tears gathered behind her lids. She inched forward, hugging his left leg.

Grisha lay his hand on her head. She looked up at him. The power of his gaze undid the well of emotions within her. She would never get out of here. Sobs racked her body. She clung to him, beseeching him.

He settled on the floor next to her and pulled her onto his lap. Ayla’s arms wrapped around his neck naturally. He caressed her back in soothing circles. She burrowed her face into the collar of his shirt, his fresh, woodsy essence entering her system. Familiar. Welcoming. Slowly, her tears ebbed replaced by confusion. Why did he comfort her?

“What are you going to do to me?” she whispered.

He caught her chin. His gaze danced over her face for an instant. His brow furrowed. The blue in his eyes darkened to midnight depths. Then his lips were on her, pressing, claiming, sparking her body alive. Her brain shut down. His tongue met hers and she opened up, eager to taste more. He demanded and she willingly gave.

Ayla was his to do as he pleased. His hands touched her everywhere, leaving behind a trail of burning need. Liquid gathered at the apex between her thighs. Her clit throbbed.

Grisha cupped her swollen breast, squeezing the turgid nub between his fingers. She moaned. He bent his head and took her nipple in his mouth, hungrily sucking. She arched, whimpering. His heavy hand slid across her thigh to her pussy. Relentless fingers probed her entrance.

She turned her head, embarrassed. Grisha thrust a digit into her. Ayla sucked in air.

“You like this. You want this,” he said, his voice husky and gritty.

“You enjoy this,” he whispered, pushing another finger into her, slowly pumping them. She mewled.

“My sweet little dancer wants my cock in her cunt, doesn’t she?”

She shook her head.

“No? That’s not what this tells me.” He curled his finger across her G-spot and began to massage it. She shook from head to toe.

“What is it, sweetheart? Want more?”

Three fingers rubbed her. The pressure increased. Ayla threw back her head. Her hips swayed involuntarily. His strokes turned quick and short. Sweat trickled down her back.

Elyzabeth M. VaLey is a writer of sizzling, sexy romance who firmly believes in happy ever after.  From paranormal to contemporary, fantasy, or historical, she enjoys exploring her characters’ darker side and writing stories about tortured heroes, strong heroines, and all that comes between them and their love.

When she’s not writing, she can be found walking in the Spanish countryside with her black Lab, exploring castles, or enjoying some tapas with her friends.

One response to “Break Me by Elyzabeth M. Valey”