After Torsten came out of the hut with the sobbing Elke in tow and the baby tucked inside his shirt, they climbed down the hillside, leaving Alv alone with the prisoner. Elke hadn’t been allowed to talk to her brother. Alv had thought best to avoid dramatic goodbyes.

He glanced over at Roeland, whose head hung. Dark, wet hair concealed his eyes. He sat cross-legged in the grass with his wrists tied behind his back and looked beaten and cold, his clothes drenched.

Alv was supposed to avenge his brother’s death, but needed time. He was a medicine man apprentice learning to save lives, not take them. Besides, he hated the idea that a family had been destroyed just because Joar had gone on a wild raid with his friends and assaulted a woman. He clenched his teeth until his jaw hurt. Now, the responsibility lay in his hands, and he didn’t know how to make up for the misdeed, while at the same time executing the community’s expectation — killing the one who hacked Joar’s head off.

Roeland looked up, black gaze shimmering in a tired face. “How is Hilda doing? She hasn’t left the hut, and no one is telling me anything.”

Alv didn’t want to answer. It pained him to tell the truth.

Norsemen never cried, at least not openly, so it would be natural to scorn the prisoner for his child-like behavior. But the hurt in Roeland’s voice brought warm tears to Alv’s eyes. His own grief, that he’d been forced to suppress in order to appear strong among his peers, blew up like a fire. The pain from losing Father and his beloved brother became too much to hold inside. His chest and stomach ached as if he’d swallowed a poison. Choking, he turned away so the prisoner wouldn’t see his reaction, but in doing so, he revealed that something terribly bad had happened.

A loud cry broke the silence behind him. “Hilda!”

Alv didn’t want to turn and see, but did. The prisoner had risen to his knees and looked up to the sky with a disfiguring grimace, as if imploring his God, for surely he was Christian, to save his wife. “Hildaaa!” he yelled again, his torso spent like a bow.

That shocked Alv. Facing the warriors, Roeland had demonstrated immense courage and not moved a hair width when Alv swung the sword and sliced his cheek. But learning that something was wrong with his wife, he expressed his innermost feelings.

“I’m sorry,” Alv mumbled, throat tight. And he meant it.

Breathing heavily, Roeland sat back on his calves and closed his eyes. Silent sobs made his body twitch. Tears pressed through his lids, rolled down his cheeks, and mingled with the blood seeping from his cut. “What happened?” he croaked.

Roeland gasped and turned to him wide-eyed.

“Oh, thank God.” Roeland hunched forward so his hair shielded his face and cried without a sound.

Tears rolled down Alv’s cheeks, too. The pain bubbled inside. He couldn’t kill Roeland. It wasn’t going to happen.

He glanced at the ocean again. The white dots had approached and now had rectangular shapes. They were probably headed for the trading settlement of Bjørgvin.

Hurting, drained of strength, he walked over to the prisoner, knelt behind him, and undid the knot. He had no choice. No way could Roeland climb down the ladder with tied hands.

It took some time untangling the thick, wet sailor rope. Alv struggled, his fingers frozen from the rain.

Roeland spun, face tear-stricken. “Why are you freeing me?”

As their gazes met, a current went between them, something real, profound, like mutual understanding. Something that brought them together on a human and spiritual level, and surpassed the fact that one man was a prisoner of war and the other held his life — his death — in his hands.

And it hit Alv how handsome this man was up-close, if one disregarded the bleeding cut and disheveled beard and hair. Handsome, noble, valiant, and with a presence and power that stunned him.

He blew out a breath, then sucked it back in and continued working on the tight knot. “Shut up.”

I can’t reveal the cover yet, but I can give you Roeland, inspired by this handsomeness: 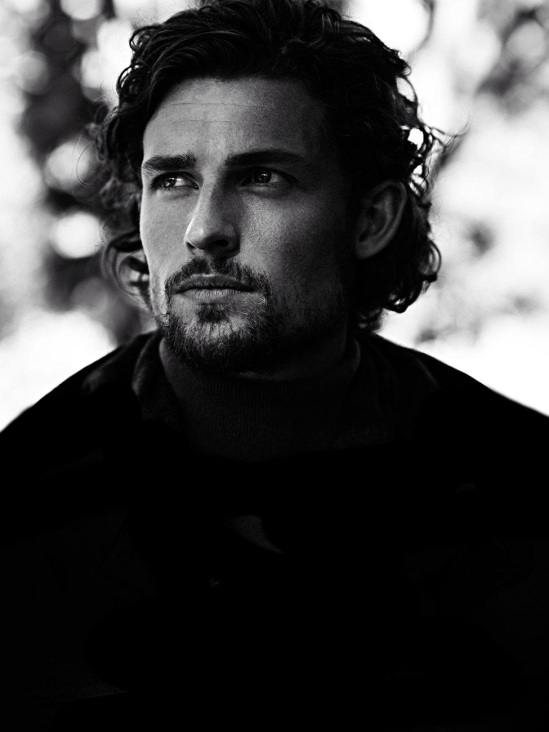 As the second son of a Viking earl, Alv Gunnulfsen wasn’t meant to inherit a throne or avenge a murder. But when his brother is slain during a raid and their father dies of grief, Alv is expected to take command and claim the killer’s death. In a world of ruthless retaliation and social codes, he must also maneuver cleverly to protect a troublesome secret: his attraction for men.

Roeland van Dijk, a wealthy Dutch merchant settled in Norway, has done the unthinkable to protect his family — hacked off the head of a Viking rapist. The wrath of the blond savages will cost him his freedom, and possibly his own head… Unless he’s willing to accept the love of another man.