Congratulations to Amara Lebel on your new release! 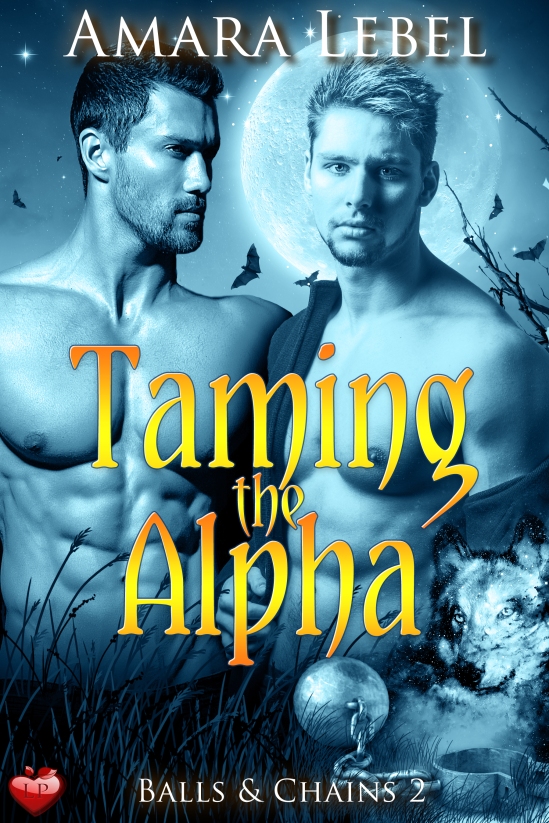 Past sins have forced Cadeon Rosseau into isolation, his pack turning against him and casting him out. Self-hatred and mutilation made him the male he is today. An alpha in his own right, he prowls the rooms at Balls & Chains in search of the one who will either save him from himself or break him completely. Jaded and alone, he finds it difficult to pull away from the self-made hell which has become his life, until a new submissive garners his attention…

Will these two lone wolves find the strength to battle the obstacles in their path and build a future?

“I can live with that. The fact that you’ll try for me, is enough.”

Cade’s chest ached at Blake’s words and the emotion in his pale eyes. If he weren’t careful, this male would be his undoing. It didn’t change the fact that he wanted him, though, and always would. He ached for him. “Blake, I need you.”

“Yes, Mon Liege.” Moving back, Blake remained on his knees, casting his eyes downward as he moved into position. “I am yours to do with as you please.”

“Such words, yet you have no idea what you’re asking for.” Cade stood, moving around his male as his body reacted to Blake’s willing submission. “You’d be nothing but a plaything to me. I would use your body, taking everything from you, and I wouldn’t go easy. I’d push you beyond your limits, force you to do things you normally wouldn’t. And then, when I’d exhausted your body and mind, I’d fuck you until you felt, nor knew, nothing but me. Think you can handle that, loup?”

Blake groaned, squirming where he knelt on the bathroom floor. “Yes, Mon Liege.”

Cade had to bite back the groan threatening to escape him. His male was something else, and he wanted him more than he had anyone else before him. “Bien, go to the playroom and get into position. You know the rules. I’ll be there soon.” Without uttering another word, Cade turned and left the room before he gave into his needs and took Blake on the bathroom floor like the animal he was.

A few minutes later, he was standing by the open door, staring down at his new plaything where he was kneeling on the floor, naked and in position. He was so fucking beautiful, and an eager and obedient submissive. It pleased Cade greatly. He wanted to reach out and touch Blake, to praise him, but now was not the time. He was his Dominant right now, not his mate. So instead, he moved to stand by his head which was currently pressed against the hardwood floor. “You know the rules. Repeat them, word for word, otherwise, we stop here and now.”

“I am unworthy of you, Mon Liege. I shall not look at you, nor will I touch you. I speak only when you give me permission to do so. I shall always refer to you as Mon Liege. And if I disobey, I will be punished.”

Cade smirked, he was so proud of his mate, but he wasn’t about to tell him that. Not yet. Without saying a word, he walked past Blake to retrieve two pairs of cuffs from the cabinet. One leather, and the other steel. “Stand.” As Blake moved to do as he was told, Cade made his way back to his plaything’s side. “Bend over and grasp your ankles.” Cade stood at his back, watching appreciatively as he bent over. His ass was bared and open to him. Temptation.

“I am not Perverted. I am a Depraved Sensualist. There is a difference!”

A true Irish lass born and raised I come from a small town in Northern Ireland called Derry, where I now live with my handsome (French) hubby and gorgeous family. I’m a full-time mum of three, and believe me when I say they keep me busy. I spend my days chasing after my lil darlings, my nights lost in Yaoi, and thanks to my amazing husband I spend my weekends writing up a storm.

Balls & Chains is an open series – anyone can submit at any time. MM or MMM+ male-ménage only. Word count 10-80k. It must have at least one shifter as the main character (Dominant shifters only!) and at least 50% of the story must be set in the club called Balls & Chains.  For further details, please contact series editor, Jennifer Denys (Jennifer.Denys@yahoo.com) or read the publisher’s website http://luminositypublishing.com/submission-calls/

Book one in the series is ‘To Claim a Mate’ by Jennifer Denys available at various outlets including: