Winter is fading into the distance and the season of love is upon us.

With desires building, passion explodes in this collection of steamy and must-read romances.

Come and join us, won’t you? Spring is in the air…

An Unexpected Twist by Krista Ames

The Millionaire by Lisa Marbly-Warir

Why Not by Dana Kenzi

Without Reservation by Lynn Burke

Art studio vandalized and her mother in a fresh grave, Meg Winters heads off on vacation with her two best friends. She hopes for peace from her grief and the return of her muse. She doesn’t expect to run into the two men she idolizes, Trevor and Jack, the secretive wonders of the art world whose work she’s long admired. She certainly doesn’t expect them to be sex-on-legs gorgeous and determined to fulfill her number one sexual fantasy. They not only awaken her slumbering body, but also her creativity and the life she used to wield with her brushes.

However, Meg carries a secret of her own which holds her back from surrendering herself fully to their desires. Will Trevor and Jack be able to overcome her reservations, or will the truth of her past ruin their chance for love?

Grab your copy for only .99 cents!

Meg’s feet moved on their own accord, turning her around. She grabbed her pen flashlight and the throw off the foot of her bed to cover her nakedness, slipped on her flip flops, and made her way silently out of her room and toward the back door. It closed with a click behind her.

Heart racing and the inside of her lip between her lower lip, she picked her way through the blueberry bushes, her gaze flitting to the lit bedroom window. The floodlight flared to life as she stepped up onto their patio.

Their back door opened before she reached it, and she pulled up short.

Jack stood in the doorway, shirtless, his jeans slung low on his hips.

The silence rang in Meg’s ears as energy crackled between the short distance separating them.

“Just one night,” she finally whispered, her need moving her forward.

Jack opened the door wide and stepped back, his hazel eyes glued to her while holding his hand out.

She slipped her hand into his while crossing the threshold, and he tugged her forward into his arms. Jack’s full lips swiped across hers, slow and completely knee-weakening. The flashlight clanked as it fell to the floor beside them. Meg sagged against his hard chest and grasped at his back with her free hand, her hold on the throw covering her slipping enough it fell from her shoulders.

He licked the seam of her lips, and Meg opened with a sigh.

A groan sounded from beside them, but Meg was lost to the taste of Jack’s sweetness, inhaling his exhales as their tongues sought the other’s taste.

The door clicked shut behind Meg, and Trevor pressed against her back, his lips finding her neck, his hands grasping the flare of her hips, keeping the slipping throw from swishing to the ground and leaving her naked.

Jack’s hands tangled in her hair, angling her head to deepen their kiss.

Wetness coated her thighs, and she wiggled between the two hard bodies, needing to find the release she’d been riding the edge of since making her decision to give in.

“I’ve been dreaming about this since I first saw you,” Trevor whispered against her ear, tugging the blanket from around her.

Jack released her lips and tilted his forehead against hers. “God, yes.” He grabbed her ass and picked her up, and Meg wrapped her legs around his waist, her soaked core settling against the hard ridge inside his jeans.

Face buried in Jack’s neck, breathing in the woodsy remnants of his cologne, Meg gave over to the shivers of nerves pebbling her skin and sending tremors through her body. “I’ve never done this before,” she whispered against his skin. “Don’t worry.” Jack strode across the living room and toward the hallway leading to the bedroom. “We’ll take good care of you. Promise.” 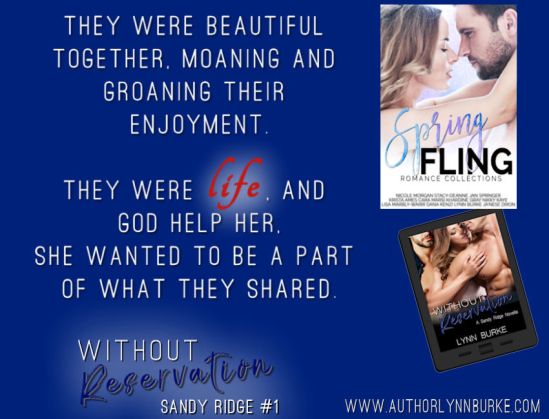