Congratulations to Harley Wylde on your new release! 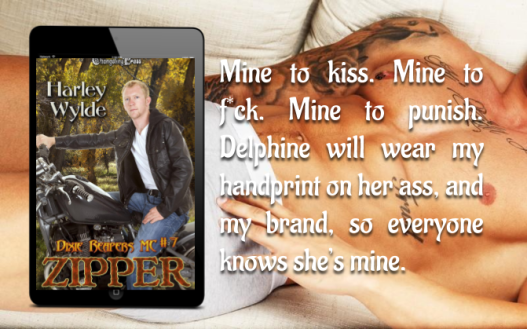 Delphine: Six years ago, I did something really bad, and it chased away the guy I’ve been in lust with ever since my hormones had kicked in. I’d been a stupid teen, and I’d paid the price. But now I need help, and there’s nowhere for me to go except straight to the Dixie Reapers, and the one man who probably never wants to see me again. If Zipper won’t help me, then I’m as good as dead. I’m willing to pay any price, and I will give him anything he wants. Is it wrong that I hope, at least a little, that all this ends up with me in his bed? I’ve never stopped wanting him, and I know I never will.

Zipper: The teen girl who had turned my life upside down now wants my help. If nothing else, I owe it to her dad, legendary tattoo artist Hwan Lee, my mentor, the man who gave me a chance when no one else would. He’s really the reason I left all those years ago. I couldn’t disrespect him by claiming what I wanted. Delphine. Not to mention my ass would have ended up in jail. Now she’s here, and she says I can have anything. Naughty girl. Didn’t anyone ever tell her not to tempt the devil? Because soon, I’ll have her right where I want her — under me and screaming my name — and I’m never letting her go. As for the men trying to kill her, it’s only a matter of time before they breathe their last. No one hurts my woman.

I hadn’t seen Mason in so damn long, and I wasn’t certain my presence would be welcome even now. I’d had a crush on him for as long as I could remember, even when I’d just been a little girl. My daddy had always taken me to work with him, and I’d gotten to know all the guys at his shop over the years, but it had always been Mason who fascinated me. As I grew, my feelings for him changed from that of a little girl to a young woman. It was my fault he’d left, even though I’d never told anyone, and never would. If my dad had ever found out what I’d done…

I took a steadying breath as I stared at the gates of the Dixie Reapers’ compound. No one knew I was here, and I wanted to keep it that way. I was in some serious shit right now, and it wasn’t fair to drop it on Mason’s doorstep, but I didn’t know where else to go. There was no one in my life I trusted right now, not even my own family. No, especially not my own family. Some slut with three kids had convinced my dad to marry her a few years ago, and I’d been pushed to the side. I’d quickly understood how Cinderella must have felt, being given all the crap jobs around the house and shop, and getting nothing in return. At least, as long as I was under the step-monster’s roof I wasn’t getting anything. Moving out helped a bit.

Things were different now, though, and not in a good way. Before Dad had died, I’d moved out. He’d been helping me pay rent, though, so I could be a nicer area. After his death, that helped came to a screeching halt, and I’d been forced to move into a not-so-great place. I’d found out at the reading of Dad’s will that he had apparently left his shop in my care if anything ever happened to him, along with half his life insurance policy. My step-monster only received fifty thousand dollars and the house, which I’d been told had a second mortgage on it. Needless to say, the woman wasn’t happy and would stop at nothing to get her hands on my inheritance. It had taken a while for everything to get sorted out and my inheritance actually handed over to me.

I wasn’t certain if I wanted to thank my dad for trying to take care of me at the very end, or scream at him for putting me in this position. Legally, there wasn’t a damn thing that Tia could do about the shop and money. But then, she’d never been one to follow the rules. I’d noticed some questionable-looking men following me lately, and I wondered if maybe she’d hired someone to do something to me. Especially after a few unexplained accidents happened. According to my dad’s lawyer, if anything happened to me, the money and shop would go to Tia. It had been a provision in my dad’s will apparently, stating that unless I was married with children, then step-mommy-dearest would inherit if I were to die. And since I wasn’t married and didn’t have any kids to leave the money to… yeah, I was pretty much screwed. I didn’t see how that could possibly be legal in this day and age, but what the hell did I know?

The gates mocked me as I stared at them. I could see the shadow of a man standing just on the other side, likely a guard of some sort. He hadn’t called out to me, but then I hadn’t exactly gotten any closer either. I took another breath to steady my nerves and approached, putting one foot in front of the other. My fingers wrapped around the iron bars and I stared at the man on the other side. He eyed me up and down, giving me time to look him over too. He seemed to be a few years older than me. “You here to party with the club?” he asked.

“I’m here to see… Zipper.” I hated that fucking name. To me, he was Mason, would always be Mason. Or maybe it was why he had that name that I hated so much. He’d been part of the Dixie Reapers even when he’d worked for my dad. Then he’d left and opened his own shop. The only times I’d seen him since then were glimpses around town, but I’d always hidden and kept my distance, knowing he probably hated me.

“He expecting you?” the guy asked.

“No. He used to work for my dad. Please, it’s important that I see him. I’m not here to cause trouble.”

The guy snorted and made a shooing motion. “Sorry, doll, but if you aren’t expected, you’re not getting in. You’re either an old lady, or you’re here to suck cock. And since it appears neither applies to you, you can just turn around and walk away.”

“But you don’t understand…”

He pointed again toward the driveway. There was only one way I was getting inside, but I didn’t know if I had the courage to follow through. I rubbed my hands up and down my denim-clad thighs and blew out a breath.

“Then maybe I’m here to party,” I said, wishing immediately that I could call back the words.

The man’s eyebrows rose, and he opened the gate. I cautiously walked past him, a little worried he might reach out and grab me, maybe force me to suck his cock. I hadn’t ever done something like that before, and the thought of sucking off a complete stranger made my stomach bubble and flip. I hurried toward the clubhouse and raced up the wooden steps. When I reached the door, I slowly pushed it open. Music and smoke battered at my senses as I stepped inside.

My eyes went wide when I saw the mostly, and in some cases completely, naked women prancing around. A few couples were openly having sex in front of everyone, and my heart started racing in fear. What the hell had I gotten myself into? And did I really want to see Mason in this setting? I knew he wasn’t an angel by any means, but I didn’t like the thought of him being with all these women.

I caught sight of him toward the end of the bar, his Dixie Reapers leather cut looking every bit as sexy on him as I’d thought it did six years ago. I felt a tingle working its way through my body, and my nipples hardened as I got closer to him. A few people jostled me along the way, but I forged ahead, hoping like hell I hadn’t made a huge mistake…