Congratulations to Raven McAllan on your new release!

Thank you so much for offering to host me today. The champagne is on ice, the chocolate open and ready, and I have no nails as I wait and see what people think.

However, I’m very excited about the fact that Temptation, the first book in my new series, Isola dei Sogni is now available from Evernight Publishing here

(You can also get it on Amazon, and from other eBook vendors as well.)

Several years ago I had two short stories out about Isola dei Sogni, an island where dreams and fantasies come true if you let them. It’s run by a rather unusual group of ‘characters’ to say the least, and there are several more stories in the series to come. (I hope).

The rights reverted to me and I pondered until eventually, I lengthened the stories and sent them to Evernight.

Who, quite rightly decided book two Temptation would make a better book one. The other story Impulse is now book two and will be released in March.

(I hope that’s not confusing.)

So Temptation is ready to be read. I do hope if you decide to give it a go, you enjoy it as much as I enjoyed writing it. I had a blast. 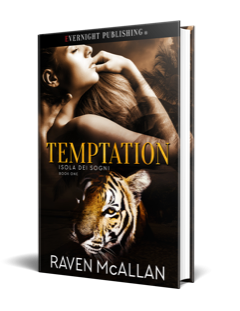 An island where dreams and fantasies come true?

That’s what Meryl thought until someone showed her the brochure.

It was all well and good until the one person she didn’t want to see was there. Ready, willing and able to give her those fantasies.

Marloth couldn’t believe his eyes when the one lady he truly loved appeared on Isola Dei Sogni. Was this his second chance to prove his love for her?

Now he just had to get her to believe in him, and that they had a future together.

Being a shifter wasn’t going to help. He’d need all of his human skills to achieve his heart’s desire.

Now a wee tease for you…

Sometimes, Meryl thought, life sucked. What had she learned? Not a lot except strong emotions hurt and mating with a shifter was fraught with difficulty. She touched her shoulder and it throbbed under her finger. The damned mark she’d noticed on the plane seemed to have deepened, almost as if it were permanent. Not only that, she realized it almost matched the one high on her thigh that served as a reminder of her earlier time with Marloth.

Oh, so not good. She needed to erase him from her life, not keep him in it. Surely, she didn’t hear a voice mutter, “You and me both,” and then as if an afterthought, “That’s not going to happen, though, is it?” As much as she wished she didn’t, she agreed with the sentiment.

“Did you speak?” Meryl asked Marloth, suspicion in her voice. He glanced up from whatever he’d been studying and shook his head.

“Nah. Why?” He switched something on—or off—and pointed ahead. “That’s where we’re off to. Tranquillita—Tranquility. Once there, you can do your own thing. I won’t interfere unless you ask me to.” His tone showed he thought there was as much likelihood of that as Elvis appearing and serenading them.

The tiny dot on the horizon he’d pointed to grew bigger by the second. Meryl stood up to get a better view. The boat surged and she fell back down onto the bench in a very inelegant sprawl.

“Sorry.” If ever a word didn’t convey its meaning, that was it.

She could only hope that if glares conveyed what they meant, he’d be very worried about his balls—human or otherwise. “Of course, you are,” she said. “Why wouldn’t you be?” A red tinge spread over his chest and face, and Meryl chuckled. “You might need something for that.” She pointed to his blush and sniggered. “After all, it seems to be spreading at a fair pace. I do hope it isn’t contagious.” He muttered something and growled. An honest to goodness, don’t-mess-with-me-I’m-dangerous growl. Meryl ignored it. He wasn’t dangerous to her, and they both knew it. Not in a scratch, bite, and maim way. Unless you count him marking her as his, and they both knew what a lie that was. In a mess-with-my-mind-and-ruin-me-for-anyone-else way, though? That was a whole different ball game. Argh, no, don’t even think of ball games.

“One day, I might just tip you over my lap and redden your ass.” Marloth spoke as if he was commenting on the price of wine. “I’ll give you ball games.”

He was at it again. Am I that transparent? As for redden my ass? No way. So why did her breath hitch and her skin tingle in anticipation?

“Come on, Meryl, be honest with yourself. We both know you like it, and we also know what was between us is still there. The thing is, what do we do about it?”

Meryl wondered how he managed to keep his tone so level. There they were, discussing—well, what were they discussing? She thought back to his last words.

“Nothing, we do nothing. It’s over and I’ve moved on, even if you haven’t.” But had she? Meryl didn’t want to think that question through. She hurried on. “And if you think you’re going anywhere near my ass, believe me, it’ll be the last thing you do before you have your balls cut off.”

He laughed. The sheer joy of it, along with undertones of danger and passion, wrapped around her and zinged to her clit.

Damn it, even his laugh wass more like a come-here-and-stroke-my-fur demand. Or a let-me-mark-you-and-claim-you-as-mine one. Why the hell was he so sure of himself, and she a quivering wreck of anxiety? And need.

“Not a chance, love.” He sobered, and the pain on his face made her tummy churn. He looked as if he’d seen heaven and hell, and it was hell that beckoned. “My balls stay attached.” 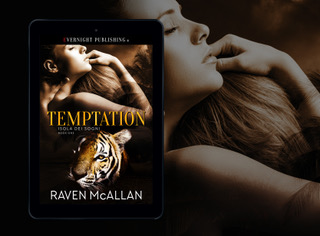 Hope you enjoyed it.

2 responses to “Temptation by Raven McAllan”