Congratulations to Thea Landen on your new release!

As I sit here writing this in April of 2020, the world seems like a scary place right now. Like many of you, I’m stuck at home for the time being, with no clear end in sight. While it feels tough at times, I know I’m one of the fortunate ones—my family and I are relatively healthy as of this moment, we have a roof over our heads (which includes room to get away from each other when needed!), and there’s plenty of food and toilet paper in the house. I suppose I approach a lot of life in the same manner, that while things could always be better, they could also be a lot worse.

Nothing will ever erase the tragedies that have already happened, and I’m sure there will be a lot of bumps in the road in the future before we’re able to come out on the other side. It’s easy to feel helpless in the face of such uncertainty. I’m definitely not going to pretend I’m saving the world by releasing this short story, but it’s something. Just a little bit of something, but something nonetheless, you know?

So, whether you needed a mental escape to a better world for a while, or if you were running low on inexpensive/free reading material to help pass the long hours, I hope this lighthearted story can brighten your day, even for a short time. Stay safe, do whatever you need to do to get by, and I’m always around if you want to drop me a line about space adventures or other fantasies. 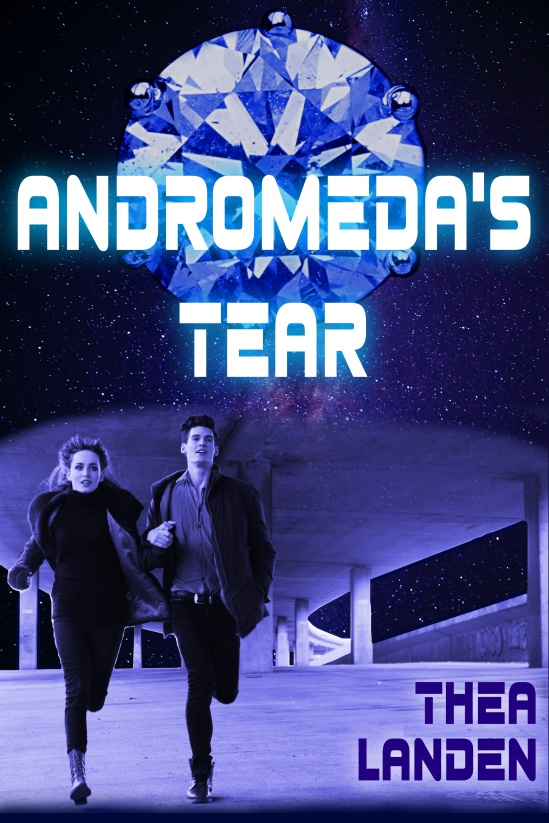 Sienna seems to have it all: a lavish home on an upscale space station, a lucrative job waiting for her at her father’s company, and a wealthy bachelor chasing after her. Just because she has an enviable life, however, doesn’t mean she’s satisfied with her place in the universe. When she meets Ace, a teleporter repairman by day and enterprising criminal by night, she spots an opportunity to make some much-needed changes and quench her desire for excitement. Together, they plot to steal a priceless sapphire from the man Sienna’s parents want her to marry. Will their interplanetary jewel heist succeed, or will their attraction to each other get in the way?

Ace drove down to Spectrum’s docks, our vehicle picking up speed as we left the space station. “Do you have everything we’ll need?” I asked.

We left orbit with an explosive burst and flew toward Titan. Ace didn’t say much while he maneuvered through the skies, and I wasn’t sure if he was interested in conversation or not. After all, I had pretty much blackmailed him into this little excursion.

Titan grew larger before us and I started having second thoughts. “You know, maybe this wasn’t such a good idea,” I stammered. “We don’t have to do this if you don’t want.”

His alluring chuckle rumbled throughout the spacecar. “The first time’s the worst,” he said. “But, like many other things, stealing gets easier the more you do it.”

Warmth spread over my face and neck. “Is that so?”

“Yep.” Ace glanced at me and one side of his mouth curled up in a smile. “Who knows. We might wind up making a career criminal out of you.”

Well, that would be a change from someday taking over my father’s company. “Let’s focus on getting through tonight,” I said.

We arrived at Titan, slowing down as we neared the capital city. Ace eased back on the controls and the spacecar straightened out to hover above the streets. He drove to a multi-story garage and parked on one of the upper levels.

“What are we doing here?” I asked. “Brooks’s apartment is halfway across town.”

“Exactly.” He reached behind the seat to grab a satchel and slung it over his shoulder when he exited the car. “We don’t want to leave an obvious trail.”

“Also, I have it on good authority that half the security cameras in this place don’t work anymore. For most people who visit here late at night, their presence is enough of a deterrent.”

He’d know more about these things than I would. “Fair enough.”

He came around to open the door for me and helped me out. Once I stood up, he didn’t let go of my hand. “Unless this is all some big ruse to get me in trouble, you need to trust me,” he said. “Follow my lead, and don’t do anything unless I give you permission.”

My mouth grew dry as I gazed up at him, my fingers enveloped by his. I swallowed and tried not to lose myself in the depths of his cobalt eyes. “Okay.”

Thea Landen lives in New York with her husband and children. Though she’s dabbled in all romantic subgenres, she has a special love for sci-fi, fantasy, and adventure…anything that pushes the imagination beyond its usual limits. When she’s not writing, she’s either knitting or crocheting, playing video games, or pretending to enjoy cardio and squats.