Ruthless drug lord Ricardo “El Loco” Ferrer launders his black money by investing in movie productions. As a teen, he learned to enjoy blow jobs in jail. Now a man of power, his favorite pastime is checking out new acting talent…and convincing them to “please” the team of producers.

Young wannabe actor Jaden Moore comes to a shady side of town to audition for a movie part. He longs to shine, wants to walk the red carpet with cameras flashing and a crowd cheering. He assures the film director and the investors he’ll do anything to reach the top, but is he willing to comply with their dirty fantasies?

Add the book to your shelf on:

In January 2018, The Audition hit #7 in the Preditors and Editors Readers’ Poll 2017 in the “Best Romance Short Story” category. 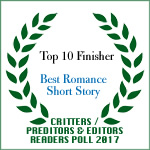 Rico is a drugs lord, violent and vicious with the looks of a catwalk model….
Jaden is a genuine, auspicious beautiful angelic boy who wants to be a movie star.

So…there is the audition…. in a warehouse….?
Jaden, dear Jaden wants to please. He wants to belong and the four men across him want to be pleased. Violence is nearby and Jaden knows exactly who he wants as his keeper.

Did you ever start reading a book and get drawn in completely? The descriptive narrative of this story is very well done and the story line is very well laid out. It is an extremely quick read and it left me wanting more.

This was the perfect dark naughty read! Would love more like this. First time reading Lea Bronsen, would def recommend!

Wow, that was one heck of an audition! The opening chapter is a bit brutal, but lays the foundation for events that happen later in the story. Jaden is a young man with dreams of becoming a famous actor and proving to his father that he is worth something. Rico is a bad mafia type who owns the production house that will produce the movie that Jaden is auditioning for. Jaden swiftly learns that he will have to “perform” for this “audition!” It was a little unrealistic that Jaden accepted this type of performance so easily, but it worked for the story. Rico did not expect to develop feelings for the young Jaden, but as the story progresses with twists and turns, the reader will enjoy the story and the HFN ending. Lea Bronsen is now an author on my radar for future works!

This was a very short story w/a lot of spice! Not to be missed if you like spice & kink in your stories! 😎

This is a very interesting and dark romance. Several good plot twists and a very good ending.

This is a quick and gritty read. Definitely not for the fainthearted or for those seeking a fun and fluffy read.

Rico is surprised at the emotions that rise within him because of Jaden and he’s tempted to take the encounter beyond one night. But the evening’s activities goes from desire to disastrous when Rico’s past catches up with him in Jaden’s presence.

Can Rico save the day, clean up his act and get his man? You’ll have to read it to find out.

DARK, BUT SURPRISINGLY NOT AS DARK AS I EXPECTED

Jaden has big dreams and believes they can come true behind a metal door with a handwritten sign “Audition” taped to it. Innocent as he is, he’s not expecting what might wait for him there. The man who owns the production house is confusing. He has the looks of a movie star, but could also pass for a hitman. And the audition procedure is somewhat strange as well. But Jaden is told that the way he reacts at what is being asked of him reveals his character better than anything else…

I really enjoyed this short and steamy story! I would love to see this expanded into a more in depth story, maybe with Ricardo’s past coming back to interfere with Jaden’s career. This was my first read by Lea but definitely not the last!

This short story covers all the bases and has you looking for Ms. Bronsen for the next. Great job.

This story was a quick, one sitting read. The story being so short it is expected to feel a bit rushed to get in a start, middle, and end. However this author handled it pretty well and gave the characters a surprising amount of depth for only having a few pages! Rico is a double life criminal and director with a shady past who shows Jaden how to open up to his naughty side.

However one thing that bothered me was the drug use and how it was gone about, it doesn’t cover anything about withdrawals, in tact it skips over that part completely with no explanation. That mixed with the rush of the plot is what brings this to a four star for me.

GOOD READ BUT NOT FOR EVERYONE

Ricardo ‘El Loco” Ferrer is 33 and a powerful drug lord and movie producer. He tries to keep some of his business on the “clean side” while getting dirty as a drug lord.

Jaden Moore is 18 and has dreams of becoming an actor and proving that he is good enough to his abusive father.

When Jaden shows up in a shady part of town for an audition with Rico and his business partners he is surprised at what is asked of him but he knows how important the job is. But for Rico, seeing Jaden produces feelings he has never had before.

When Rico’s two worlds collide will he realize what is most important to him?

I enjoyed this book but it will not be for everyone. The book is M/M with super hot scenes between the men in the book.

Rico was super powerful and you could see how dangerous he was with what happened with Andrew Phleck at the beginning of the book and you never saw the middle of the book coming with the consequences from that.

I really had no idea initially what was going to happen at the audition and when I discovered how far it was going I think I was in as much shock as Jaden. It was interesting to see what Jaden discovered about himself at that time but always knew but was afraid of his dad and therefore hid everything.

I loved the change in Rico due to everything that happened and I must admit I was super surprised that he agreed to Davidson’s request at the end of the book.

This was the first book I’ve read by Ms. Bronsen and I did not know what to expect. Rico has had a hard life and now is a drug lord that has a reputation for being crazy. As a teen he spent time in jail and that’s where he learned to enjoy blowjobs from men. Now aside from his drug trade he owns a movie production company that’s where he filters all of his dirty money. He and his team of producers enjoy “auditioning” new talent. Jaden is looking for his big break in the movie industry and auditions in a seedy part of town for the movie role. His home life sucks, his father prizes his older brother because he is a baseball star and Jaden doesn’t measure up. What he doesn’t expect is the probing questions from the producers and director and the tasks he has to perform. When they all retire to the club connected to the audition that’s when everything explodes the round. Will he get his prized role in the movie when all of the dust settles?

This book was a novella so the characters and the story weren’t as developed as I’m used to, but is was still a fun read. The heat level of this book was off the charts. I would read more by this author.

Just what I needed, a quick little naughty read 😉

Thanks to all these lovely bloggers for hosting the release!