Four dangerously dark and delicious stories that will awaken your dirtiest fantasies.

NOT ONE NIGHT by D.C. Stone:

One night of pleasure isn’t worth losing a lifetime of friendship. Or a reputation. Or a career. A spot in the social standing. That irritating innocence. Or the always-so-present pride.
…
But it is worth losing her heart.

His family has the wealth and power to give him anything … except approval.

Gianni Bencivenni marks his time in lines of cocaine. One lover is the same as the next within the walls of addiction—until his family puts a contract out on his life. On the run with the last man he wants to be in close quarters with, Gianni has to decide whether his yearning for acceptance and love can overpower his need for a drug-filled haze.

Johnny “Butcher” Mascagni marks the black sins he commits. Death is his profession and ghosts of the dead haunt his waking moments. His penance for the dark life he’s led. Through all the men who have shared his bed, love is a promise that eludes him. When a former lover becomes his last assignment, Butcher must decide if he can set his demons free and open his heart again.

Ex-convict Luke has been fortunate enough to land a small job as a kitchen assistant, but he’s lonely and crippled by baggage from the past.

CEO Roman Spencer also has his share of problems. It doesn’t help that a tough and hot-headed kitchen worker begins to plague his mind…and body.

The more Luke runs into Roman, the more his dark fantasy turns into attraction. If he surrenders, his thug pride will effectively go down the drain.

Alexis Harrison is a mess. She’s managed to blow out her knee, lose her scholarship, and get hooked on pain killers. Now she’s playing mule to her dealer, who is her only friend, to support her ever increasing habit.

If something doesn’t change soon, her addiction is going to cost Lexi more than just everything.

Add the book to your shelf on:

See photos that inspired us to write the book: 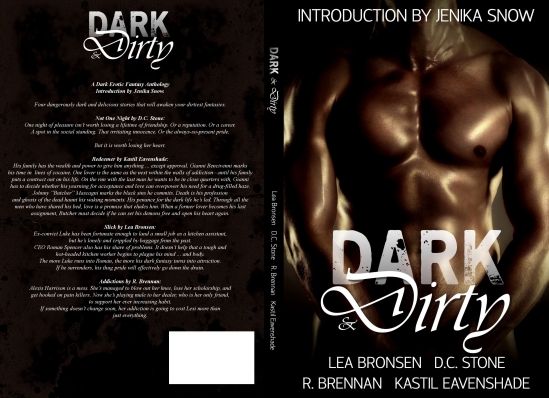 On release day, it hit #25 on Amazon’s bestsellers list “Erotica Collections and Anthologies”.

A week later, it was the #43 Bestseller on All Romance eBooks, all categories.

Your writing is very sexy.

So the problem with novellas is I always want more.

I loved all four of these stories. The characters were amazing, the stories amazing and the writing is what I would totally expect from these wonderful authors.

SLICK BY LEA BRONSEN MUST READ

It’s all about pushing buttons, power exchange and showing your bare soul…
Intense to the bone, full of emotions, sensual, intriguing, dark, raw and highly highly …. everything.

Read the blurb and you know the subject..

– Truus from Love is Love Reviews

I read Slick by Lea Bronsen and I really enjoyed it. It’s a short story but is very well written and developed. Luke, an ex-con, and Roman, a CEO, are wonderful characters with a strong connection. Total opposites but their attraction is undeniable. I really like that their relationship is a slow build and how understanding and compassionate Roman is with Luke.

A great group of hot, naughty stories, long enough to satisfy, but short enough to gobble up in one sitting. IF the kids aren’t too demanding.

All were exciting and different ! My favorite author is Rebecca Brennan. Great story. Looking forward to the next one!!!

I confess I only read two of the books because they are in the genre I read, but if the other two books are as good as the two I read then this will be an awesome read. I couldn’t put the book down, I didn’t even want to cook dinner that’s how good they were.

I am reviewing 2 of the stories of this anthology Redeemer and Slick. Both stories were well written with interesting plots and characters.

Redeemer:
DARK and DARKER! Kastil Eavenshade is a new author to me so was not sure what to expect. This was a very twisted, violent story of drug addiction, murder, lust, loyalty and finally love. There is a touch of ghostly visions and interactions which I thought helped the story seem more romantic after reading of the violence. Overall I give this story a 4/5 stars!

Slick:
I have read a couple of stories by Lea Bronsen and am never disappointed. Slick was the complete opposite of Redeemer so lightened up the mood for me. Luke and Roman’s (nicknamed Slick by Luke) story was unusual. This is a straight to gay trope which can be difficult to master believably, but this author succeeds nicely. This is a low angst, slow build story of the cafeteria worker showing the executive that love can be found in unusual places and ends with a sweet HFN. Overall I give this story a 4/5 stars!

I enjoyed reading both stories and these authors brought the steam with them, so bring a fan!

For now, I’m reviewing Slick by Lea Bronsen. I’ll update my review once I’ve read the other stories.

I really enjoyed the interactions between Luke and Roman. I did feel Luke was often too cold toward Roman, but I understood that came from a place of needing to protect himself after the difficult life he’d lived so far. Roman wanted to protect himself, too, having been blindsided by what he believed was a strong and happy marriage, turning into a nightmare. He’d also never been attracted to another man, so he spent some time trying to deny his feelings for Luke.

When the men weren’t trying to freeze each other out of their lives, they were so good for each other. And when they finally let their walls crumble, they were beautiful. I’d love to see a continuation of their story, but if all I can have is this novella, I can still say I’m satisfied.

Redeemer – Well the author wasn’t lying when they said dark!! Drugs, addiction and semi non-consensual sex!! Also alluding to sexual act with an object not meant for sex… ticking all the dark and dirty boxes n not in the hot sexy way for that part!!

But this is a tale of forbidden love… and I mean that strictly cos they have to hide who they are or get killed for loving each other.

Gianni was not an anti-hero that’s giving him too much credit but I could feel his pain! Having to hide who you are, getting lost in drugs to make it go away. Damn poor tortured bastard!!!

If you’re not into prison sex thats borderline sadistic then skip this book, not for you! But if you like that or like me you’re waiting for the redemption part go for it!!! I won’t lie some of the scenes in then book took me aback. Like legitimately, but God… I feel bad for the guy like he’s punishing himself for being born into the wrong family with no way of escape that’s no way to live.

Ooo then she threw in a guy that could talk to ghost or was hallucinating who knows but I dig that. We didn’t get enough background but it was a short story soo I’ll let that go, I felt like there were thing put in that if this was a full length woulda made so good.

This book is not pretty legit not pretty! It’s bloody, it’s tragic, did I mention bloody too!! N the imagery was hella vivid!! Sledgehammers and drug usage and well you get me.

I won’t lie there were some punctuation issues which made reading the book a little trying. But all in all I wanted more of Gianni & Butcher! Not the parts that came before but I woulda like to see where they went as a couple.

Random point the book switches between “I” and “Roman” which isn’t good or bad but worth pointing out. So I guess first and 3rd person.

Now this one I wanted to punch Luke who’s one of the MC’s, you’re supposed to feel bad for him, young guy who gets railroaded when he’s 15, has served time, he’s perfect to feel sorry for, but he’s a dickhead. He’s a reverse snob n I felt like he was playing with the other MC Roman! Which I found super annoying.

Especially when they were about to get together that whole show of domination is cool if you’re into that that but Luke implying Roman was stupid for letting him get with really really made me dislike Luke but then he went all mushy so I forgave him! Lol!

I like that they are well suited but I woulda like to have more background on them. You know cos they were actually interesting characters and it being a short book did them a disservice.

There were some cringe worthy moments but you’ll live!! I legit woulda read a full length book bout them though. Especially Luke OMG when he said, it’s possible but I was passed out, I cried!! Legit cried for him.

What 15 year old gets charged as an adult for an accident. I found that super annoying won’t say implausible since the American judicial system is flawed sooo.. ya!!! 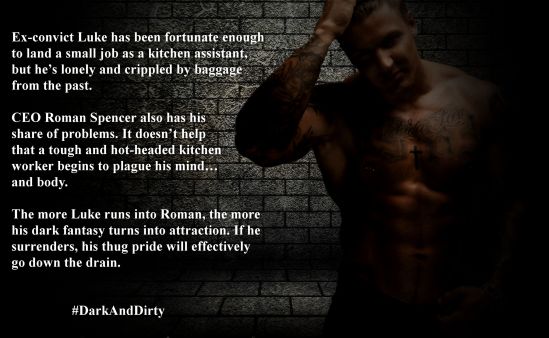 Thanks to these lovely bloggers for hosting the release!