Happy Wednesday, and thanks again to the lovely Angelica Dawson for organizing the MidWeekTeases!

This week’s tease comes from my dark Viking romance Torn Avenger, which is scheduled for release on September 20th 🙂

Roeland was stunned. It was the first time he experienced anything like this. His relationships with women had never reached such a level of anger-fueled desire. Alv’s entire being seemed to envelop him, body, mind, heart and soul. Though the two men were the same height and Alv slim and bony, his power surpassed Roeland’s. Maybe it was the alcohol in Alv’s veins that gave him such a superhuman presence—the smell of fermented honey drifted from his mouth, with a comforting, ensnaring even, hint of sweetness.

This was surreal, like a dream. Alv’s sexual energy absorbed Roeland, and he couldn’t fight it. A week after his poisoning, he didn’t have physical strength. Why resist anyway? He didn’t have anything in life but a little time here and there with his daughter. The rest of the day and night, he sat chained to a wall in a stinking animal barn, waiting to recuperate enough to do hard labor like most of the other slaves. If that was supposed to be his fate, he didn’t mind receiving warmth from a fellow human being.

To be honest, there’d been something between them since Alv stopped him from jumping into the deadly ocean. Alv had protected, nursed, and defended him, always with kindness in his ways and warmth in his blue-green gaze. Roeland had believed their relationship to be brotherly and enjoyed their exchanges, but tonight, their feelings for one another seemed to morph fast into something more.

He didn’t oppose. Alv’s desire didn’t appall or repel him like the one of another man might. Maybe it was the effeminate side of Alv that made it acceptable. No, not only that: it was fascinating, genuine. And it revealed a fundamental truth: Alv needed him. Like a spider feasting on its captured prey, Alv’s hunger ate Roeland alive, and strangely, he liked it. It’d been so long since he’d felt this way—alive. He didn’t care that Alv’s intensity consumed him, if it made him feel real and sharply present in the moment. It might even help him forget about his slave collar and chain for a little while.

Thank goodness his inner voice said it was okay, that he deserved love, sex, and he shouldn’t feel bad about it. When she died, he’d believed he loved her so much he could never be with another woman, but now he did just that with Alv, this half-man, half-woman being. It didn’t feel like he was cheating on her. If it had, he would’ve loathed himself for the rest of his life. But Hilda would’ve wanted him to be happy. Speaking of life, the Vikings might do away with him any given time, and what was happening with Alv could well be his last chance to share intimacy with someone.

He parted his lips, and Alv slid his wet, sweet-tasting tongue inside his mouth. God, delicious. Roeland moaned in appreciation, his body melting even more, his cock growing.

Alv released his lips with a small sucking sound and whispered, “Ssh, be quiet.”

Oh, right, they weren’t alone! Cold flash back to reality. 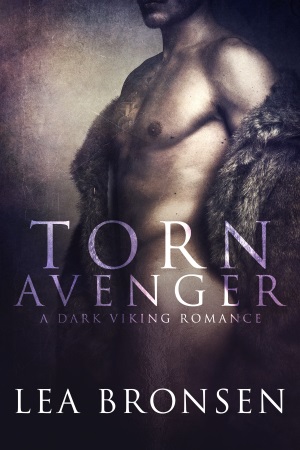 As the second son of a Viking earl, Alv Gunnulfsen wasn’t meant to inherit a throne or avenge a murder. But when his brother is slain during a raid and their father dies of grief, Alv is expected to take command and claim the killer’s death. In a world of ruthless retaliation and strict social codes, he must also maneuver cleverly to protect a troublesome secret: his attraction for men.

Roeland van Dijk, a wealthy Dutch merchant settled in Norway, has done the unthinkable to protect his family — hacked off the head of a Viking rapist. The wrath of the blond savages will cost him his freedom, and possibly his own head… Unless he’s willing to accept the love of another man.

Add the book to Goodreads!

See photos that inspired me to write the book: