Congratulations to Clare Dargin on your new release! 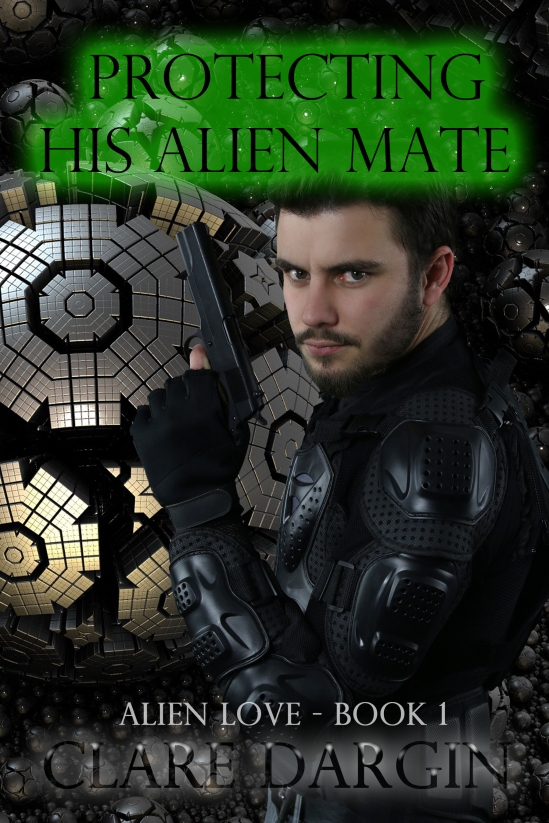 Damian Shepard is no ordinary prison guard. He’s a Solarian, an alien race that sought refuge on Earth over a century ago. They live peacefully and anonymously among humanity and prefer to live in the towns they have founded. Because they live longer and are stronger than humans, they’ve created their own system of justice designed specifically to punish members of their race who have committed crimes.

Shunned by his family for being gay, all Fletcher Voglar wants is a happily-ever-after with a sexy man who loves him. But when he is wrongfully sent to prison by a corrupt official, Fletcher gives up his dreams of having a life filled with love and happiness. One day Damian stumbles upon Fletcher during a routine check of the prisoners where he works. Instantly he knows that the frail yet beautiful human is his destined mate. Finding a mate is one thing but when that perfect man turns out to be an inmate at the prison where he works, Damian’s world is turned upside down.

But when the opportunity arises to get his mate out of there, Damian jumps at it. The crooked Solarians who threw Fletcher in prison are now after Damian too, and they won’t stop until they’re both dead. Can Damian win Fletcher’s heart and clear their names or will their enemies kill them before Damian gets a chance?

“My little sub, on your knees,” Damian said.

In one graceful move, Fletcher obeyed.

“Take everything off, pet.”

Fletcher winked as he slowly undressed. “I don’t see why I bother to wear clothes around you, I end up taking them off anyway.”

“Why do I have to be quiet now? You seem to like the way I make noise in the bedroom.”

“You have now earned your first spanking,” Damian said.

Fletcher mouth hung open and his eyes were wide.

“Why so surprised? You knowingly defied me.”

“I didn’t think you were actually going to do anything.”

“You thought wrong.” Damian patted his lap. “Over my legs, ass up.”

Fletcher screwed his mouth into a crooked line.

“Do I need to repeat myself?” Damian asked in a stern, controlled voice.

“Then place yourself over my lap.”

Damian lifted his hands out of the way as Fletcher lay down over his thighs. It wasn’t graceful, but it got the job done. He had no doubt in time Fletcher would able to do it without fumbling around since Fletcher was a bit bratty.

“I want you to count. I believe ten swats will be sufficient punishment.”

Damian’s dick hardened. He closed his eyes and concentrated. This was all too exciting. Every inch of his dominant nature was being satisfied.

“You need to pick a safe word. It’s a code word to get me to stop if I take things too far.”

“Sir, I have the word I want,” Fletcher said.

“Are you certain this is the word you want to use?” Damian asked amused. He expected the word red or something close to it. Leave it to Fletcher to choose such a gentle and soft word.

“Then velvet it is.” Damian rubbed the globes of his ass with his large, calloused hands. Damian growled then exhaled a long breath.

“This is not meant to hurt you but to teach you a lesson. If this becomes too much, I want you to tell me. Do not say the word stop. Use your safe word.”

“Because of your brattiness, you will receive ten strikes. You will count them out, is that clear?”

“I am not a tyrant. Nevertheless, I am your Dominant so you will respect me as such.”

Damian placed one of his hands on the center of Fletcher’s back and ran his other hand over the twin pale globes situated right in front of him. Fletcher’s ass was perfectly rounded and curved. After one smack, as the imprint of his hand came up in a nice rosy tint, Fletcher hissed, then his dick sprung to life.

Clare On The Web:

One response to “Protecting His Alien Mate by Clare Dargin”